Madrid
6:10
Croissants and red wine for breakfast, after having been awake since around 4. Health food of champions.

later
Leaving the Hotel Finisterre, after a second breakfast. Stuffed myself, Chris shows some restraint. Can't figure out why a really ordinary place like this has the same two-star rating as the brilliant Hotel Paris. Oh well.

7:55am
Successfully negotiated the Metro, to the Bus Terminal, otherwise known as Bus Hell. The ALSA ticket office. Two billets for Astorga por favor. Terminal 33. There's time for a cafe con leche, from the nightmare of a 'self-service' restaurant at the top near the escalators. You collect a ticket, wait in a queue that's far too long, or if the queue's too long and you're Spanish, just push in, or if you're a Spanish caballero who used to vote for Franco, just pretend there's no queue there at all. Or, if you're a hungry Spanish caballero who used to vote for Franco, just eat your stuff while you're waiting in the queue. But, wait, there's more. You then carry your stuff on a tray (if you're lucky), to the check-out, show them the ticket, and pay the money, then negotiate the crowds of other early bus-waiters, who are also pretending not to see you until you push their chairs in with your knees to get passed. I was vaguely entertaining pouring a scolding coffee that I can't see, down the back of several Franco-lovers that I also didn't see until it was too late.
But wait, there's even more. Finally get to your table, and your other half says she's nervous about the time, and wants to go back down to the Terminals, and wait for the bus down there.
My faint glimmer of holy superpilgrim-ness is being put to the test.

Pleased to be going back to the Camino, to Astorga, to the smaller towns, to the Main Event.

8:05am
Moving, the bus backing out, leaving.

9:28am
Seems to be a competition here, between the Spanish Landscape and the movie Hotel New Hampshire. The landscape is an easy winner for Chris, but the Hotel New Hampshire would be, for me, if the sound was turned up, even if it's in Spanish. Life is Serious, Art is Fun, and keep passing the open windows. Everybody is quiet.

1:35pm
Astorga
Met the hospitalero near the Cathedral, "Your woman ?" he asked, as I introduced Chris.
Taking Chris on an Astorga Greatest Hits tour, the Cathedral, Palace, Plaza Major, the Alimerka Fruit Lady, Post Office, and finally, the albergue. And Chris is now officially a Pilgrim, she has her passport, and her first stamp, put her boots on the boot racks, and has claimed a bed.

7:07pm
Sanctus Spiritus, and Chris will be blessed at the end of it.
We've been all over town, coffee and tea at the Cafe Gaudi, which has pictures of Elvis and the Beatles placed in appropriate places. Then around more streets.

Standing up. Phew, sitting down again. 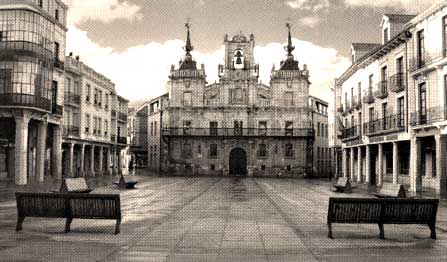 To the Plaza Major, waiting 'til the two people appear to chime the time, and Chris rearranging the contents of one bag into another bag she's just bought.

Trying to find a restaurant. Not easy. Not the kind of thing I's used to looking for. Most other times, I've been led to them. They seem expensive.

Standing. Sitting again. The nuns at the back giving it their best.

To the Cyberstore, some new hotmails, then to the Cafe Pasaje, off Calle Major, to hold body and soul together. Wonderspunk serving, all teased hair and skinny legs and all. Raciones, donut things this time.

The nuns are having the wafer and wine.

9:47pm
Was pleased that some other pilgrim appears to have already picked up the copy of 'Zen and the Art' that I left near reception. Finished reading it on the bus down to Madrid. Chris is drawing a sleeping pilgrim, and somebody's radio is playing "I Will Always Love You" from the Bodyguard.