Arca
6:12am
Sitting out the front of the refugio, and been awake for a while. Chris has been awake even longer, "hours," she says.

6:18am
Another two pilgrims leave. I recognize one of them, from much earlier in Spain.

6:26am
And now another group, five guys, one of whom has a light attached to his head. And there go two more, now another one, a bikie, and he's blowing snot out of his nose.

6:35am
And now another bikie, also blowing snot. Must be some kind of bikie ritual. There's another two leaving, looking fresh and up for it, and one of them is carrying two walking poles strapped to his backpack. And over there, another two.

7:15am
Now it's our turn, but only as far as the first bar. The only one in town. Coffees, and KitKats.

9:15am
Lavacolla
After passing the Santiago airport, we've arrived in Lavacolla. The place where male pilgrims are meant to wash their balls. It's apparently what the name means anyway. I'm not sure what bits the female pilgrims were meant to wash, as the Wife of Bath doesn't specify.
Still, we're in the bar here. First things first. Second, later, wash the balls.

11:20am
On this hill, Pope John Paul II gave a Mass, in the Holy Year of 1993. Written on it, engraved, is "Juan Pablo II, Peregrino de Compostelle".
I'm wondering which refugios he stayed at. Did he complain about the smell of El Cebreiro, or about the pilgrim shite on the walls at Palas de Rei?

a little later
Saw the spires of the Cathedral, and gave a tiny, very quiet, whoop for joy.

1:57pm
Santiago.
"All Right !!" from the middle of the Square in front of the Cathedal itself.

There's a man in a box to my right who's waiting to hear my sins. My sin is my thoughts about the tourists who have just taken a place, and one of them is holding a walking pole that he's just bought from one of the souvenir shops. The handle part of the pole is still wrapped in it's blue plastic bag.
The altar is lit. Vespers. Starts at 7:30.

Have done all the right things. Placed my hands on the column underneath Saint James in the porch, into the grooves worn by a millenia worth of other hands; walked behind the Apostle, and given him a hug, resting my head on his; then underneath, where the apostles remains are in the silver, bejewelled box.

The altar is brilliant, except for the huge pink angels that appear to be holding up the top part. Did these sculptors learn nothing from Michelangelo about proportion? But I could just sit, in this pew, for ever. 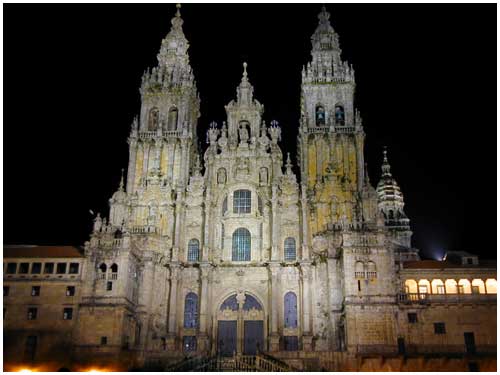