Already 5kms into the walk, the first three were pleasant, along the left bank of the Lot, but now the climbing has begun. Strange French sounding phrases enter my head and won't leave until another phrase replaces it. I've either just passed Montégut, or about to.

8:53am
Climbed a long, made, uphill road, sweating, cursing, then convincing myself that I should taken the left turn into Campredon, it says you have to in the guidebook, but the turning itself has the 'not this way' signing. Walked back down the road, walked along it, fizzled out, through junk cars and a tractor blocking the road, and "pouvez vouz m'aider ?" to a boy, who points back the way I've already walked .. curse

10:07am
and just when you need them, more walkers. A girl with an 'Australia' t-shirt, and her father. No, she's not Australian, but did spend a month in Sydney, and they both speak excellent English. I follow them.
People just appear when you need them to. The girl photographs me with her father, and yes "one of us is going to Compostelle". I photograph them. 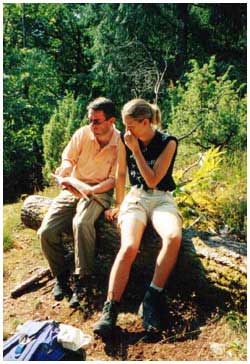 The road walking was hard, but we're back on the tracks now, on the way to Golinhac.

1:21pm
And now about an hour to Espeyrac, and still in the company of these two. I don't know their names, but the company is great. It's his first walk, and like me, they have no idea of where they are staying tonight, although the Gite at Espeyrac is apparently a good one. It's not mentioned at all in my guide.

Stopped at the Golinhac supermarche, then the bar. The bar was outside, and it was good. In fact, the entire afternoon has been good. After a brilliant start, along the river, then the right way, then the wrong way, then the right way again. I think I'm learning the trick. Just enjoy whatever happens.
Stopped for awhile after Golinhac, at the offered melon slices and apricots, yes, they are "very refreshing". Must buy a melon, although a complete one would be too much.

4:18pm
Espeyrac
and there definitely is a Gite here, 'cos I'm in it, and I've installed myself, just as the "installez-vous" sign on the door says I should.
I seem to have brought the flies with me again.
The final part of the walk was mainly made roads, which wasn't pleasant, but the grassy track leading into the town was great. A look in the Church of St Pierre, and a statue of Jean d'Arc. Seems new-ish. Haven't explored the town yet, I'm just going to enjoy this coffee I've just made. Oh yes, another superb effort.

4:23pm
Think I'll have another coffee.

6:45pm
Wandered down to the centre of the village. One hotel, got "hello'd" by the Norwegian couple, who apparently know me as 'The Scout', because of the hat. Chatted for quite a while, then joined by the people I walked most of today with. We're all basically just waiting for the village's one epicerie to open. 6:30 'til 7:00, that's it. Bought stuff for tea, and finally, the bottle of gazeuse water, then back to the Gite.
Damn, there's three boyos in the room as well. I hope they don't expect to party all night.

7:20pm
And I've just done the magic needle through the blister trick on the daughter's feet.

later
Most of the evening in conversation with the father, who's explaining a myriad points of interest along the way. The people who are the butt of French humour, the shades of grey in the Conque Cathedral windows, and more, studying maps, this way, then that, it's wonderful.