6:47am
Slept late. I'm normally on the road by now. In the kitchen of the Gite, having prepared yet another bowl of coffee. I think that 'cup', in French, is 'tass'.

7:26am
Climbing the vierge. There's a bell constantly ringing somewhere.

8:30am
Vierge.
From here you can look down on everything.

At the Cafe Des Arts. Couldn't resist it. The shoeshop is closed Lundi, damn. Successfully asked direction to the Bureau de Post. This is a great cafe.

10:55am
Eglise de Saint Pierre de Bessejoules, and which for a 1,000 year old church, is truly impressive. Sitting on what could have been a table perfect for human sacrifice. There's five other backpackers here, God knows where they sprang from.

11:29am
Holy Bejyasus, that was a difficuly climb. Passing girlscouts on the way down, they had it easy.

2:38pm
Just looking for something cold, and a beer is the only thing to be had. It's hot. But at least I've showered, so the swarm of flies that have followed me from the beginning has dissapated a little. Just the ones that have become friends are still hanging around.
There's no hotmail in town. The chick at the Tourist Office said it messes up her computer. While the Hotel Madame only has it at her home. Well, take me to your place then.

Today was hard bits, the Vierge, the next climb up, then the final one which paralleled the main road. The the made road parts, which just seem to go boringly on. Walked with the Belgian duo for a little. They have a daughter studying Art History in Madrid. And I discovered that the lip balm tastes kind of nice.

Anyway, had a coffee as soon as I arrived in this "Plus Belle Ville de France". Asked for the Gite d'Etap, but couldn't understand the directions, so got a hotel room. Easily enough. Then a wander. Ended up in a bar across the street. I'll nurse a beer here, until they throw me, and the flies, out.

3:34pm
At the 'Aux Armes', the front, the chairs d'plastic, under the shade, I could sit her a long time, people on motorscooters, backpackers arriving, none looking at all hot and bothered like I must have. The sign over there points the direction to Aurillac 65 and Entraygues 17, wherever they may be. And on the other side is the Poisson Peche van. 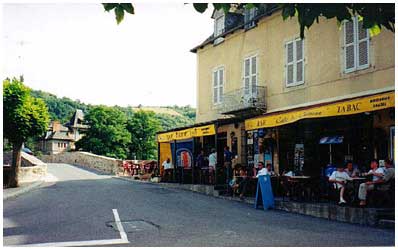 5:35pm
Still here, although I've been for wanders inbetween. To the eglise, then to the epicerie when it opened, coke and cacahuettes and apples, then back to the other place for another baguette. Oh yeah, I can feel a real feast coming on.

5:42pm
Moved, closer to the river. There's a vegie garden on the other side that any self-respecting Pierre woud be proud of. And the marcheurs still walk in, recognize a few.

6:23pm
Up at the Chantillerie (near where I discovered the Gite was) and it's all the fun of the fair. Le stock cars (le dodgems), le rifle range for shooting balloons; picking up ducks with a stick, people pouring money in hoping to win a fluffy prize. There's crepes and other unknown goodies with lots of sugar, and if I'd been here at 12 there would have been a parade with a band. Woudn't have minded seeing that.
There's announcements being made that I don't understand, whereas before it was music over the loudspeakers, medieval string stuff.

8:27pm
And so ends another day in this great, stupid adventure. There isn't a scale appropriate to measure the stupidity of it.
Sitting by the Olt River, making tea. Half a baguette with tuna, or Neopolitan, whatever it's called, the other half for breakfast, the second half baguette maybe for lunch, depending on what can be bought along the way. Spending what seems like stupendous amounts of money, having to buy Coke, 2 euros, just so I can sit with the Belgian couple outside the restaurant, they're boring anyway. Pointless browsing in shops, just filling up the time. Hope tomorrow is better, although the Belgian guy has promised rain. If it does, then I hope I'm already at where I'm heading.