La Roche
6:07am
Leaving, thinking "at last, I'm free at last !", then thinking that it could just somehow get worse than this, but right now, I don't see how.

8:20am
St Alban sur Limagnole
Walking with Ana, the Spanish student, who just suddenly appeared, climbing over a barbed wire fence. Thinking that it could just somehow get better than this, but right now, I don't see how. 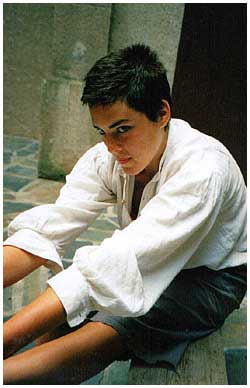 We've been at the supermarche. It's brilliant to be understood, to be able to speak to someone and have them understand you. She lives in Paris, and we've talked a lot. Yes, I miss my wife. Koalas, permanently stoned. Children, two. Other stuff. I'm not letting this chance to talk go by.

10:12am
Near Les 'Estrets
In the open field, just resting feet.

11:20am
Left Ana behind at Pont des Estrets, where she had to do some washing in the river there, and herself I suspect. Amazing how people just appear when they have to.

12:37pm
Aumont-Abrac
In a bar, yet another 2 euro Cafe Grande, with something called Akimbo, which turns out to be a coffee flavoured lolly.

The last part was boring. Continually up a long road that barely changed. Remember thinking that as I do most of my walking looking down at the ground I could be doing this walk anywhere. 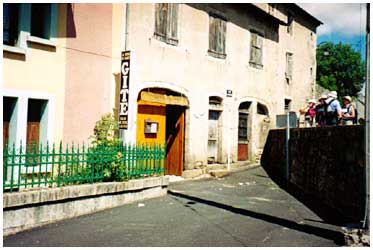 At the Gite, have a top bunk, sharing with the women again. Was invited for coffee, went. Louise, the Canadian woman, the one in red, and the one who let us stash our stuff until the Gite opened.
Waited until 3:00, headed back to the Gite, and luckily there was a place, although there seems to be more tourist pilgrims. My socks are drying on the line, it's sunny, I'm sitting in the shade of the courtyard, and things are good. Met Anthony and Ana in the street, and later, Jean-Louis.

6:40pm
Back to the Gite. Walked the length of the town a few times as I'd been led to believe there was an Internet Cafe somewhere, but couldn't find it. Asked at the Office d'Tourisme, but non, there isn't one. Doesn't matter, things are better anyway.

9:16pm
Spent the evening in a mostly non-conversation with Louise and the other two. Tomorrow I'll have to cook, just to prove that I can do it. Thinking about two nights in Nasbinals. Thinking that if I can get a bed at the Gite Communal, I'll stay one, or if not, two nights at a hotel. Maybe.