Sauges
6:00am
Waiting for the patisserie to open, as I'm almost out of water. Should have prepared for today at the supermarche yesterday. Sitting on the steps in Place Joseph Limozin, and opposite me is a doctors residence, Patrick Bourret, and in his window is yet another of the posters for

The patisserie is meant to open at 6:30, but I'm not holding my breath, I think it's only the French trains that run on time. 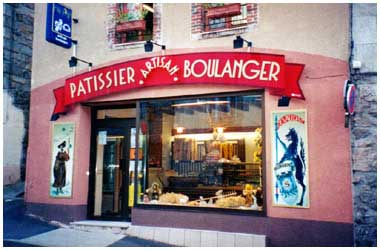 I don't think I'm coping very well with this. The getting up and walking part is fine. Maybe it's just getting my head around the enormity of the thing, the scale of it all, and although 90 days is supposedly more than enough, I still don't know what that means per day, or when I should be taking days off, there's not too many two-day towns.

Some other walkers pass by, leaving, both older and eager, and not only do I get a "Bonjour" but a "Bonne Journee" as well.

6:10am
Still no sign of movement down at the bakery.

9:00am
Villeret d'Apcher
50 kms. Since leaving LePuy I've walked 50kms, and to celebrate I'm sitting on the stone fence, having just finished the can of abricots. 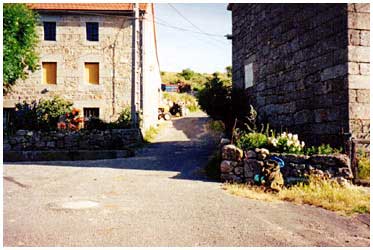 10:05am
I'm off the track, but getting supplies meant having to divert to Chanatielles, about a kilometer. Still, I have another Cafe Grande, and a good look around the grocery shelves at the back of this cafe.

12:40pm
La Roche, after lots of walking on the road.
Of the three Gites in town, I don't know which is the right one. I'll probably just have to wait here until somebody turns up. Maybe I could go back to the one near the start of the town. Feels like it's going to rain.

12:52pm
And apparently I'm not in Haute-Loire anymore, this region is Lozieres.

1:57pm
This is a Gite, apparently. It's shite. It's some old woman making a buck out of a spare room at the back. Jaysus, the dunny shares the same room as, well, everything else. It's all one room.

Anyway, turned out the place I was sitting in front of was the right place, I think. Walked back to the first Gite d'Etap sign, asked there, and she tried to send me to a cow shed, or maybe the Gite further down. Walked back to this one, and two little kids on bikes asked what I was looking for. Eventually knocked on the door, and the old woman answered.
Explaining that "moi ami Anthony telephones reservation", and oui, oui, she seemed to know all about it. Given a choice of orange or citron juice. Citron. Shown the room. I'm a beggar this time. But it's still shite. Utterly shite. 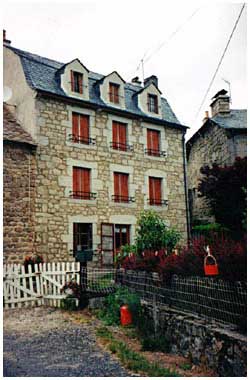 2:50pm
Slept.
The backyard here, just outside the door is full of grass that resembles wheat, filthy plastic chairs, what look like sectioned telegraph poles in the wood pile, and a huge collection of dog shit. Madame Whatever kicking it out of the way to make it to the door here when she showed me the room.

3:05pm
Her name is Mme Jalbert.
And Jean-Louis has just turned up.

3:20pm
Still don't know if I'm actually in the right place or not. Apparently Mme Jalbert thought I was Jean-Louis. And I can't really make myself understood here.

Wishing I had a novel to read, anything. I have hours to kill here, and it's raining. Just drizzle, but the thick socks are wet. I'd had them airing over the filthy plastic chairs and they got rained on.

4:25pm
And just spent a happy half hour drying them over the stove's hotplate. How thrilling pilgrim life can be.

5:21pm
This cannot be the place Anthony booked, as he was told 6 euros, and I've just had to pay 9, and Anthony hasn't turned up.

Mme Jalbert has somehow gotten it into her head that the only reason I could not possibly understand French can only be explained by my apparent deafness. Apparently I'm deaf. First I knew of it. And that I'll understand if she speaks loudly at me. I hate being yelled at. Hate this.

9:30pm
And Mme Frog brought up a slice of cake, then left. Returned the plate, ended up listening to conversations in French that I didn't understand, beginning to feel nauseous.