8:15am
Flamarens
The ruined chateau. Oh well.
Got menaced by cujos. A pack of three, one of which got behind me, them retreated when I made to get something out of my pocket. The second two were with their master, "not bite", he said. Yeah, right. They won't bite with no feckin' teeth, pal. The third, solo, that a yelled a stream of invective at. It left. Another one was more interested in chewing the tail light off a car parked in the garage of the farm I was passing. Kind of tip-toed past, letting it get on with the indicator light.

9:22am
Miradoux
Don't know how I ended up here, but so be it. It's still on the GR, but I think it's a variant. The guidebook suggests it only as a possibility. Some beautiful houses, and the boulongerie smelt wonderful. Have baguette, will travel. Bought chocolate as well. One euro. Hang the expense.

Walked a short way with a French woman. Spouses, children, where we come from. She was born in Lille, but now lives near Lyon.

The weather's much better for walking, much cooler, lots of cloud cover, it may even rain, maybe not. Don't care. Have bread, chocolate, and an orange. And a bed tonight, so everything's pretty much d'accord.

Stupid songs going through my head, as all of a sudden I'm aware of "with a little bit of luck" and "she bop".

2:57pm
Lectoure
Today's final destination. Walked 29½kms, nearly eight hours, the final part. the grassy part climbing steeply up into town, seeming to take forever. The Office d'Tourisme packed, wall to wall tourists, and the gite is just across the road, and

Only a few minutes to wait. I need a shower, I stink. The toxins coming out of my head could fuel Saddam Hussein's weapons of biological devastation. Speaking of such, a few doors up from the gite is the Hotel de Bastard. Not kidding.

just after 3
Seemed to be some confusion as to whether or not I've actually been booked in here. In the Gite manager's office, talking, explaining. Something seems wrong, until he asks where I'm from. Melbourne, Australia, and suddenly everything is wonderful.
He leads me to the corridor, and shows me a world map, one with hundreds of coloured pins in it, showing where previous pilgrims have come from. There's been a few from Sydney, but I'm the first to be able to place a pin in Melbourne. He's as pleased as I am.

The others are arriving. Guy, the pilgrim with the dog, Clementine, Joe, and the other two who camped down by the lavoir at Saint Antoine, then others.

3:45pm
In the Sherpa Bar. Cafe Grande. Ill go on a slow wander around the town soon enough. Have to visit the eglise, apparently it's something special. Walked through some really nice places today, but right now my feet are hurting.

4:42pm
In the eglise, and I do believe the JC up on the cross, above the altar, has wings. 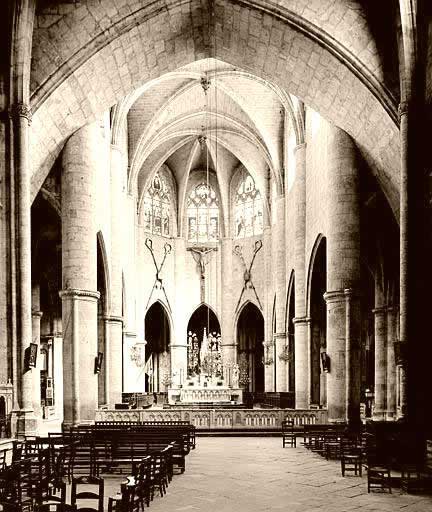 5:05pm
But no, the Office d'Tourisme gives me the address of the Cyber Cafe itself. They only have the one connection too, and there's already someone using it. So, ordered a coffee, the small 1 euro kind, and I'll just wait.

5:36pm
Then tapped on the shoulder, and I can use the internet now. Three new hotmails, including one from Rory, who wants to know what I'm seeing. Roads, lots of roads, lots of balises, the red and white signs, many tiny little towns where it seems that not much happens, the occasional larger town, lots of ruins, long asphalted roads, little roads, minor roads, unmade roads, tracks between fields, stony roads, footpaths, grassy tracks, up roads and down roads, roads that sometimes get me confused. Some roads that go on forever, roads that skirt farms, thousands of acres of sunflowers, some growing rye or wheat, occasionally passing herds of cows that I "bonjour" when there's no-one else around, sometimes taking a break, usually in the small towns, sometimes buying a baguette along the way, sometimes stopping for an hour then moving on, finding the way into towns, finding the Offices d'Tourismes, asking the directions to whatever gite I think I might be staying in, looking around the eglises that aren't locked, all different, yet somehow samey, all featuring the stations of the cross and burning candles, some dark, some light, some huge, some small, local saints with French names, Saint Antoine, Saint Pierre, usually a handful of tourists in the larger ones, also just looking. French towns, busy in the mornings, dead after 12, coming to life again around 2 or 3, people in bars, drinking coffee or having meals that go on and on. In supermarches, having choices of cheeses, local varieties, entire aisles of wines, some cheap, some expensive.

evening
And the dinner was sensational, utterly extraordinary. All the pilgrims staying at the gite having a meal together in the 'dining room', a meal cooked by a local chef and his wife, made from food donated by the local grocery stores, soup, beans, sausages, not forgetting the Senegalese Crumble, the cheeses, the reed wine (with the main course) and the cold rosé (with the crumble). The man who runs the gite looking so happy just taking care of pilgrims, and the chef looking happy preparing magnificent meals, and the young priest, sitting opposite me, looking happy as he was eyeing off Clementine like you wouldn't believe. I can tell. And, at the end, singing Pilgrimage to Compostelle songs
Ultreya!