early
Crossed the bridge, found the devil, declined the 'sportif' option of climbing up to the cross, but took the 'around' way. 4 kms of 'up' roads. Sweatsweat. Finally to la Roziere.

7:40am
La Roziere
Already been on the road, walked 5kms, took well over an hour, maybe an hour and a half. And yes, it's going to be a hot one, my shadow on the road is already enormous.

8:46am
Beginning to hate the word 'up', and I think the top of my head has become a fountain. I like the word 'undulating', it means sweat, then not sweat.

9:16am
Labastide-Marnhac
And buggerations, the phone is broken, there's something rattling around in the earpiece. Some careful manoevering of some heavy duty farm equipment was entertaining though. And the 'eau potable' tap was more than welcome.

9:59am
The sign says that it's 8.5kms to Lascabanes. Having a break. Walking past the sunflowers was great. They have big, happy faces.

10:54am
Now, the next sign says 5kms and not only that, it has 'etape' with a picture showing what's meant to be a Gite. Got bonjoured by a Frenchman, who pointing to his own hat said something like "a la bouton". I have no idea what a bouton is, but I smiled and gave a "Oui" grunt-type reply.

If I had to label this part of the walk, it would be 'Walking Through Cicadas', every tree screaming with them, kilometer after kilometer of noise. It's kind of nice.

11:40am
And you can be utterly sure you're totally alone, sit down for a breather, and instantly get bonjoured by other backpackers. This time, a French couple, "ca va ?"
"Tres bien !"

They walk on, seeming like stout types. I trail them a little, then began to ask myself why, so stopped. and intentionally let them get way ahead.

1:28
Lascabanes
At the gite, although this one doesn't open until 2. Had a pique-nique lunch with the French couple, who're walking on to Montcuq, another 9kms.
Been here about an hour already. Something cold would be nice. The water is warm, I don't trust the water from the tap, and there's absolutely nothing in town. Pretty enough town though, it seems rather wealthy, and passed what's called a "chateau-like building" on the way in, and the swimming-pool looked inviting, but non, it's not pour moi.
French people seem to be able to produce the most fantastic array of food from their backpacks, and I just don't know how they manage it.

Another backpacker arrives, he has the Saint James scallop shell on his pack. He's sitting over there, in the shade of another tree, and not only carries an entire epicerie's worth of goodies, but also produces his own deckchair. Bejaysus, his pack is enormous. One push and over he'd go. I'm very, very tempted.

6:24pm
Montcuq
And if I wrote down all the evil thoughts I'd entertained on the 9kms between here and Lascabanes, it would fill this diary. Mostly involving reaching over the reception counter of the gite and throttling the woman who told me they were cômplet was a popular one, although the others, well, they've dissipated under the haze of the two Heineken stubbies I bought from the Petit whatever, Casino. Still, she did manage to get me a room at the Saint Jacques Hotel.
Arrived, hot, the sweat forming channels. The water bottle is warm. Had to walk through the town, completely, asking directions, the hotel is in Sud Montcuq, which I think literally translates into South of My Arse. Found the hotel, I'm shown the room. It smells like Araldite. 35 euros, vastly overpriced, whatever.
Showered, had a coke downstairs, offered to pay, but told 'later'. Whenever that might be.
And despite a 32km day, went wanders back to the main part of town. 32km, at least I've proved that I can handle a 30plus day, maybe I'll get better at it. Maybe if I'd been psyched at the start of today for the 30plus epic, I'd have handled it better.
Up to the Centre Ville, the old men playing boules. Found the Cybercafe I'd seen on the way in, and get into a conversation with the woman who runs it, although the cyber part of it is more like an afterthought, the main event is the pottery and crafts dominating the place. Apparently, she has rooms upstairs. Wish I'd known, would've stayed here.

8:00pm
So glad I knew of the rooms at the Cybercafe. As that's where I'm staying. Maybe fate is playing it's hand, and just dealt out today's pickings.

After a long sit in l'eglise, the seven stained glasses, and there'd obviously just been a wedding, as the entrance was strewn with petals. Bought grocery stuff, the usual. Stopped by the War Memorial, to 'l'Enfants du Montcuq', there's the name 'Mosquito'. No first initial, just Mosquito. I think I would like to have known Mosquito.

Eventually back to South Montcuq. Walking in, something garbled about 'Chambre 2', yes, that's me. Time to pay. Something else garbled, no, no tea, no, no petit dejeuner, works out to 28 euros. The fat woman takes the credit card, and whipwhipwhip, she's doing the swiping too fast, it won't work that way, she's not giving it enough time to register. Whipwhipwhip, same trick. They want cash, more whipwhipwhip, then something garbled about how it doesn't work. It's not the card, you stupid old slag, it's the way you're intentionally making it not work. I don't have the French for 'you stupid old slag', let alone 'you're doing it wrong on purpose'. She gets louder. Why is it that old fat slags presume that the only reason you could not possibly understand French is that you must be deaf. She gives the card back.
Went up to the room, quickly, packed my stuff, showing everything into the backpack, quickly. Left. Something garbled as I left. Don't care, I'm leaving.
Hoping the Cybercafe with the rooms upstairs is still open, almost running the 2kms back to the Centre Ville. Sweating, the t-shirt soaked by the time I get there, my forehead dripping.
Damn, it's closed. I try the door, locked.
A guy sitting outside the Cafe de France asks if I need something, I stumble something in French, to which he responds "It's okay, I'm English." And he turns out to be Tim, the husband of the Internet lady. I explain. Got emotional, had to turn away in an attempt to compose myself. He checks with Jill. Yes. They have the flat, and I can use it.
They're wonderful people. I get the guided tour, the bed is made up, and shown which ring of the stove is dodgy, and I'm given the key, and shown how to shut the door, you have to use a little force. 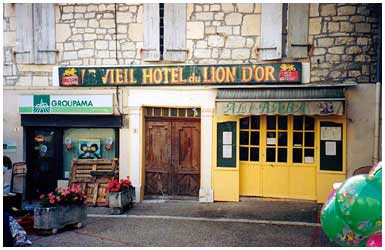 And it's not actually called the Cybercafe, it's Ali Baba. There's jazz playing outside, a real jazz band. Trad. And I'm just up here making tea, noodles as usual.