Saint Privat
6:17am
Leaving.
Slept, eventually, but woke in a sweat. Probably from nerves, and maybe doubts about the whole thing; how stupid it is. Can't tell the time in the dark, could've been anytime between 1 and 8.

8:26am
Monistrol
In a cafe, having yet another Cafe Grande. 2 euros. I like it here, this bar feels good, like it's frequented by real people, not tourists. 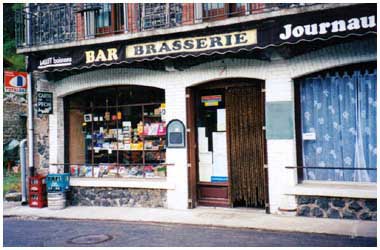 Next, just to find a baguette and water, and I think the shop is around the next corner. And I suspect that the cloud of flies that have followed me have successfully invaded the bar.

Liked being alone. For some reason, the idea that I should be more independent, yet willing enough to follow the leader gets me going. Like I don't really know what I want.

The walk was difficult, down stony paths were the worst. But apparently I have the joys of ascending similar paths coming up soon.

a little later
Yep, found the shop. Yoghurt, and the famous chocolate bread, for breakfast. The health food of champions.

9:11am
And, oh bejaysus, that was a climb. Puff puff puff, sweat sweat. Maybe I should have stopped at the Chapelle de la Madeleine halfway up, she might have made it easier for me.

10:51am
Le Vernet de Saugues.
At the fountain. Amazingly the blue cheese survived, but I'm ditching it anyway, had visions of blue cheese permeating the backpack. The last section of the walk has been much better, gentle rises in the road rather than the heart attack material.

12:01pm
And the bells of Saugue are going berserk, obviously heralding my arrival. Like Saint Jacques himself descending into town ...

1:44pm
Everything since arriving in this town has been utterly shite.
Found the Tourist Office easily enough, they gave me a map, and eventually found the Gite, although nowhere near where it's marked on the map. No-one there, and the door's locked. Waited. Then left.

2:50pm
But Anthony is reserving us places at the Gite at De Sauvage for tomorrow night. If Jean-Louis had actually reserved places here for tonight, then it's the first they've heard of it.

Anyway, in another tabac-bar thing, the Chez-Soi or something, having my second Cafe, a reward for successfully negotiating the ATM. 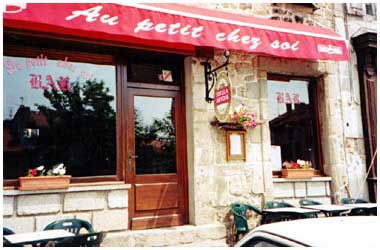 Waiting for the supermarche to open. This town has a theme of the ferocious dog, a symbol of a slavering beastie with a lolling red tongue is kind of everywhere. The music in here is French rock, and my ankles hurt. So maybe all those stony paths took their toll.

3:07pm
The walking is fine, if strenuous at times, and although the mattress roll got slightly pegged when I had to crawl under a barbwire fence, whatever, it was still good. It's all the inbetween, not-walking, bits. The finding food, finding the Gites, the necessary attempts to converse. It used to be that if you made an initial attempt to speak French, then they'd respond with what they knew if English. But not anymore, at least not here. These people honestly know no English. None.

I think I have a room at the Gite, with three women. I'm confused about this. I'm shown my room by another walker, which doesn't seem right, and I'm kind of half-expecting to find my stuff out on the balcony when I get back, as there's obviously been some kind of terrible mistake. I think I'd prefer the 'communal' open area. I could get up early, get dressed noisily, and really annoy 'em something chronic.

Tomorrow's walk is 'only' 19 kilometers, although it's up and down at least one mountain, with some occasional flat bits, so it'll be slower. Having to rest on the up bits, having to take care of the knees on the way down. All the time worried that one slip will stuff everything. Being so careful. I want to do this, even though at times it's not fun.

Wonder what the French word for "knees" is ?

4:12pm
Back at the Gite, and still everything's locked, and I don't have the keys to either my room nor the communal room, but for some reason two young things are moving bedding around. have no feckin' idea of what's going on, or where people are. But my washed socks are flappin' in the breeze.

Again, been at the Office d'Tourisme, and asking "il y-a un supermarche en ville ?" and the girl responded with another map and mile-a-minute French. I caught the word 'legumes' which I think means vegetables. Whatever. It's another epic walk to the Shopl, or Shopi, whatever the last letter is meant to be.

A stroll around the shelves. Wine is frighteningly cheap. Bought stuff. Cheese, 'ton a salade' in something called 'Neopolitan', whatever that might be, some apricots in a can, and two apples. French ones. They might help.

4:23pm
Everything's quiet on the Gite front, you'd think somebody would be here. Maybe they've all been spirited away for catch-up, remedial English classes. Couldn't hurt. And maybe the washerwoman who responded to my question with "je ne comprend pas" has been beaten to death with a baguette. Live in hope.
Still, it's a nice enough town. The Chez-Soi was the best though, just so French. The bar assistant looked like she belonged there. Some make the effort, some don't.

7:15pm
Tea. The half a baguette with the tuna and salad, and apparently Neopolitan means lots of noodle things and vaguely spicy stuff.

Before leaving tomorrow I have to get supplies. Food. Water. The usual. Judging by the book, there's not much along the way.

7:25pm
The other three, Anthony, the woman from Canada, and the other one with the red hair, are blathering away, but I've just been asked if I'd like frites for dessert. It's been translated.

evening
Mostly sitting around, listening to the conversation, but understanding very little, and eventually going into mullet mode, with the occasional question directed at me, usually to do with Australian animals and Tasmanian Devils, and jokes about other nationalities.