Cahors
7:56am
At the Cafe le Forum, my first Cafe Grande for the day. A small wander, after bonjouring the cleaning lady on the way out. Not much of a night, some other patrons of the hotel having a slight altercation involving much slamming of doors, have no idea what it was all about. Not do have any idea about the gist of the comedy routine that's on the television at the moment, although I definitely got the L'Oreal ad.
The weather's on. It's sunny all over France, and today it's predicted to reach 30, although they're also predicting rain for tomorrow. Great, just great.
News. The French Minister for the Economy is on, now Chirac, now something about France Telecom, and lo and behold, something about Legionnaire's Disease, guess I'd better stay out of the 4-star air-conditioned rooms then; something about the killers of Daniel Pearl, can't tell what the verdict was, or the sentence, nothing; something about somebody named Kathleen Grundy; then somebody else's shock resignation; images of food and hungry children and refugee camps; army tanks; the Tour de France, and a blue-singleted rider is pumping his fists into the air; and Alle Tiere, whoever she may be, is showing her tits; and that just about wraps it up for the French news this morning. 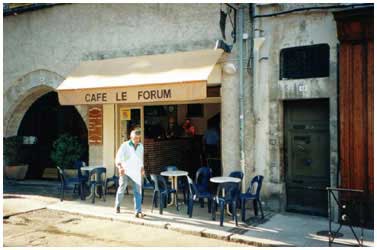 Today's plan is not to be very touristy at all, but to sit for as long as possible in as few places as possible, and try not to get depressed. Maybe I'm just wallowing in it, in some kind of perverse way, maybe I'm really happy when I'm depressed. maybe it's just me, maybe I just enjoy being alone, and enjoy the encroutements that just go with it. Maybe, in all this wallowing, I'm having the time of my life, maybe I'll look back on these three months as say "yeah, that was good." Even when it's bad, it's good. Actually, though, right now I don't feel too bad. I've successfully spent half an hour in this cafe, and have nowhere near finished this coffee. I'd better drink it, as it might start growing mouldy soon.

8:37am
L'Eglise
Saint-Jean-Gabriel-Perboye is the Saint with the pigtails, while 'Charlemagne fait don du Saint Svaire a l'eglise de Cahors', and the painting that should match this one, to balance it, has been hacked out. Wondering who was in that one.

12:30pm
And I know every bookshop in town, I think there's five of them, including one second-hand place, two levels, but the large Langue Anglais section upstairs didn't have too much in the way of actual books in English, more books by English authors translated into French. Looking for Wuthering Heights. Saw it in the first bookshop I looked into yesterday. Down the spiralling staircase to a couple of small shelves. Damned if finding the place was as easy as yesterday though.
Up and down the main drag a few times, getting waylaid by the Internet Cafe for a few hours. For a day that began with a resolution not to do too much walking, so far has involved a lot of walking, looking in a few side streets, which always seem to reach back to the main drag again. This bookshop, nope, that bookshop, nope again. Down further, Rue Nationale, I'm beginning to recognize places, but nope, not there either. Food Hall, buy stuff, take it back to the hotel, shops are nearly really to close up, and the bookshops from yesterday just appears. I'd utterly given up finding it. In, downstairs, find it. Nope to Stephen King, I've been through my Stephen King phase anyway. Hearts in Atlantis, well, sounds interesting, but it's always the same story dressed in different clothes. And not always that, I bet the main character wears a chambrais shirt, whatever that is. And sorry to whoever wrote '12 Bar Blues'. Didn't buy you. Wuthering Heights, so I can stop pretending that I've actually read it.

Finally to the hotel, dumped the stuff, down again, to a baguettery, bought a can of Kronenberg, as the only way to survive a French afternoon is in a slightly pissed way, as the French themselves discovered centuries ago.

Jaysus, I've wandered around so much, I think I've become a feature in this town. The Man In Black. L'Hombre Dans Noir. In one bookshop, read a Tourist Guide to Australia. Belgrave Station is 'Le Gare du Belgrave', and Puffing Billy is the only attraction in the Dandenongs, along with Miss Marples.

The budgies in the cage, for sale, the postcards of Cahors - bought one, just to get change, which pissed off the saleswoman who actually asked if I had l'monnae, well I do, bitch, but I'm just buying the card to get the change to pay 2 euros to the Internet guy up the road.

The beggars with the dogs, the big dogs. The chick with all the hair and the studs in her face, the 'bananie' postcards with the happy blackfellers, the bicycle shops, the fountains, the carousel outside the Office d'Tourisme, yes, they really do have them, the restaurants, l'brasseries, yep, think I've 'done' this town.

And depending on the quality of how sincerely you want to pray, you can have a 0.50 candle, ranging right up to the 3 euro ones, if you want your full-on prayers answered experience. You also have to pay to wander the cloisters. They're supposedly impressive, but I'll hang out for the ones at Moissac, apparently they're the ones to beat all.

3:22pm
Meanwhile, back at the Cafe le Forum, for the second cuppa. The guy continues to play solitaire, while, this time, the TV is showing the live broadcast of the Tour de France, The announcer continuing to speak excitedly about every tiny detail, every swerve, every time a rider puts his bum in the air. And there's four guys in here who are utterly transfixed by it.Even the front page of today's 'La Depêche' is dedicated to the Tour:

Whatever that means, I'm surmising that an American is about to shove it up the French.

3:38pm
I've decided to try and string out his coffee until the race is finished. They have 44kms to go.

3:50pm
35kms remaining. And they have back-up teams handing them fresh water-bottles. Bet they're cold ones, too. That's what I need. When I'm sweating up a hill, for some chick on a motorcycle to hand me a coldie. These guys have it easy. Let's see 'em walkin' then ..

4:08pm
20kms. It's almost getting exciting. Even though I have no idea who's in front, Americans probably.

4:11pm
They're passing through a town called Aulos, wherever that might be.

4:14pm
Yep, the coffee is stoney, but I have a challenge. The last sip when the eventual winner crosses the line.

4:16pm
A backpacker just walked in. She has an enormous pack, sits really high, I'm betting there;s almost no weight at all on her shoulders. If I ever do anything like this ever again (not likely, but whatever), I'm getting a pack like that one, with a frame, and sidepockets.

4:27pm
The backpacker left. I bet all the weight is on her hips. That'd be heaven.

4:35pm
Hey, there's some Australians in the race. Stuart O'Grady, Baden Cooke, Bradley McGee,and somebody else, Robbie McEwan, and none of them appear to be doing very well. But then, I don't know what colours they're wearing.

4:37pm
8kms. My last sip is waiting. This could be a tremendous victory for long-distance coffee drinking.

4:46pm
And Armstrong, the American, must be the one in the yellow shirt. I think that means he's the overall leader, so far.

4:44pm
He's sprinting up this hill, looking behind.

4:45pm
I lost. Just had the last sip, but I'll stay and watch the end anyway.

4:47pm
5kms, and the rest of the pack are looking a bit puffed. Maybe they could try the Tour de France with backpacks, that'd sort out the mere pretenders.

4:48pm
The guy sharing this table has been through three beers while watching this. Ha! I've maintained the one coffee. he has no willpower.

4:50pm
4kms. And the road they're riding on is almost solid graffiti, and I can't make sense of any of it. I mean, what's 'Pili Pixi'? The American is going to win this part of the race. Between the crowds lining the road, and the back-up teams, it's amazing that the riders can actually pick they're way through. Crowds running alongside them, waving flags at them, screaming at them.

4:53pm
There's a particular red flag, with a green and white diagonal cross that gets flapped a lot at the riders.

5:01pm
That's it, then. Armstrong is pumping the air, but the race is on for second, between the pink and blue riders. And it's the blue, just.

5:05pm
Don't think the Australians did very well, haven't even heard the word "Australien" at all.

5:30pm
Buying stuff at le Petit Casino, then fruit and a baguette from the Food Hall. Really dislike the beggars, with really big dogs to support, outside the food places, the one's that sit behind a tin cup, I don't feel guilty about not giving them anything, as they look vicious, and so do their dogs.

6:14pm
Another small wander. I can find the Calligramme Bookshop almost effortlessly now; looking through the downstairs collection of Art books and World Music CD's. Nothing too startling.

7:19pm
Another dinner down by the Lot. Had to find somewhere, in the other direction from last night. Found a park, there's a very large wicker statue of a woman, and a stone Pan, and on another seat there's an old guy doing a crossword.
Crack open another beer. Cold. Seem to cope better when I'm slightly pissed.

There's something on in the main street tonight, Rue Gambetta, there's drinks stalls being set up. Probably something to do with the Blues Festival, probably get some more of the free Blues gigs.

7:45pm
Still in the park. There's a new old guy on the other seat, but this time he has a small black dog. Meanwhile a guy near the back entrance to the park practices his three ball juggling. I've seen him earlier, busking in the street.

8:01pm
Wandered up from the park, ended up near the top end of Rue Gambetta. It's 'Route Barre' and the brasseries have spilled their tables and chairs onto the road, Blues bands have set up, some playing, and the lead singer/harmonica player cavorting every way, didn't know harmonica playing was such a physically demanding gymnastic sport. Should be an Olympic event.

8:45pm
Back in the cafe equivalent of Harley Heaven. My seat out the front from last night has been taken by a hugely fat man and his friends. It's okay, I'm not about to ask him to move. I'll just sit inside. There's a couple going furiously at table-top soccer, and I've just learned from a computer game that Uma Thurman is named after a Hindu love god.
There's posters for Easy Rider on the walls, and the pinball machine is called No Fear. A good place to actually begin reading Wuthering Heights, It might take a while to get through it, which is good.