Cajarc
6:12am
And yes, folks, out there it's pissing down rain. Not yer instense, I'll-be-over-in-a-minute type rain, but yer full-on I-think-I'll-just-hang-around-all-day persistent type rain.

The sky last night had a vaguelt reddish look, always thought was a good omen, so maybe it doesn't in the Northern Hemisphere.

Interesting walk, threatening rain the entire way, sprinkling occasionally, having to put the poncho-thing on a couple of times, uncomfortable. Left before the others, those who sat around an enormous breakfast, not last night's gourmands, but another group. Au'revoired them, began, the slow ascent to Gaillac, 4kms away, and seemed to cover the distance in no time at all, but then, these same people being dropped off there. Le voiture. Batardes. They're travelling light, hardly anything. Followed them some way, despising them, but then not bothering to despise. If that's they way they choose to walk, then so be it, but they do put pressure on the Gites.

Walked on, a patisserie van pulling up outside one house in some village, honking its horn, and an old lady shuffling out to buy her two baguettes and groceries. Even the local dogs seemed more interested in the van than in me. Luckily.

Into Limogne, finding the Office d'Tourisme and asking where the Gite was. That way, where the car just turned, one minute down.
Found it. And I just love the Gites with "installez-vous" on the door. Install yourself. Found a non-reserved room, and installed myself.
To le Petit Casino. Cacahouettes, noodles, and stuff. Just about got this side of it down pat. There's music, Kate Bush's "Wuthering Heights", and I'm probably safe in assuming I'm the only one in the store who knew the lyrics.
Met the Belgian woman from last night, and she was asking me directions. Needed bread. Well, it's just up there. Bought a baguette, as usual.

1:28pm
Nope, there's a second bar, and I'm in it, having a petit Cafe. A troop pf backpackers marched through town, all wearing gaiters (must be English), and they're now ensconced in the back room restaurant here, chowing down mightily. The brunette bar assistant in here is quite pretty, and it seems to be part of her job to chat with the male customers, particularly the three at the bar. There's a Dr John CD playing, a song, something along the lines of being down so low, he could just lay his head down and cry, then feelin' so bad he could lay down and die. 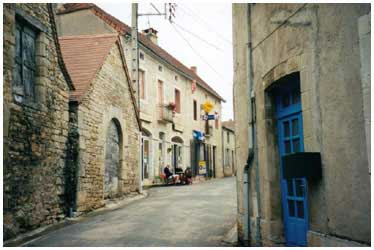 There's a bookshop, a librarie, next door. Opens at three, hoping there's something in English. But I'm just trying to work out the logistics of this thing. I've walked exactly 300kms so far. The distance, from LePuy to Compostella is 1495kms, leaving 1195. I've spent 15 days so far. Bejaysus, I'm getting confused already.
I've 92 days. let's say 46 days in france, 46 in Spain, so I've about 31 left in France. At this rate, that's 600kms. 600kms from here leaves me in Logrono, in Spain, 897kms from the start. Spain begins 751kms from there, or 451kms from here. So, I have a breathing space of about 150kms at this rate, about 7 days. Oh yeah, seems okay, I can afford a few two-night stops. Cahors, Moissac.

4:05pm
Finished reading 'The Times', that I paid 2.80 for. Feeling totally ignorant of anything newsworthy. And lo and behold, it even has the footy results, and not only did Geelong win, but it was Collingwood they beat, by 78 points. Essendon got done too. The rest was fairly predictable.
Other news. Chirac didn't even know he'd been a target, and much debate over wether it was an 'incident' or an 'assassination attempt'. 250,000 people packed Brighton Beach to hear Fatboy Slim; a Millais has been bought by the National Portrait Gallery for £430,000, a portrait of Louise Jordan; somebody else is keen to build a "traditional mansion" in Kent has had the plans rejected; Prince Harry can down six bottles of Smirnoff Ice; George W Bush is a lucky recipient of some insider trading, apparently; the sentencing of the killer of Daniel Pearl is feared to possibly unleash an Islamic backlash; Malawi's social fabric is unwinding after three years of famine, and the machete is the weapon of choice there; Japan's supersonic test flight blew up; the British Commonwealth superstars are drug-addled; Australia beat the British in the 'coxless pairs, hah! somebody else's cricket computer game has decided that Len Hutton and Graham Gooch are England's best openers. Yeah, whatever; Valentino Rossi is redefining motorcycling; and with a few other bits, that's about it. Can't really read the weather forecast, looks like an 'occluded front', can't make it's mind to rain or not, or sunny bits between the not sunny bits. Seems about right, describes today pretty much.

4:40pm
And a look around inside the Office d'Tourisme, and exhibition of 'sanguines', which I think must mean pastels, by Jean-Serge Machet, which aren't too bad at all.

Everything is back to life again, Le Galopin cafe has the tables out the front, and it's doing great trade; the Astral Peinteries, kind of a cross between a hardware and a household shop; next door, the Petit Casino, with it's array of fruit and vegies out the front; while over the road 'Le Fins Gourmets' promises 'producteurs foies gras produits regionaux', so if I was tempted at all in the many ways goose livers can be pâted and flavoured I'd be in heaven; then we have the Pharmacie with it's green and blue neon sign, not tempting at all, despite having a crack in my right heel, which I've band-aided, and I suspect that the band-aid has tried to become part of my skin. Anyway, to continue the travel guide, next to the Pharmacie is the Boucherie-Rôtisserie, which apparently also doubles as the local charcuterie-conserves place. Up the street on my left is the Patisserie-Boulongerie, where I bought today's obligatory baguette.

5:35pm
And the British guy who told me that I could buy an English newspaper turned out to have lived in East Brunswick for three months, knew Belgrave, and the girl he was with was from Wicklow in Ireland. She's here for three months as an au pair, and wants to study psychology, seemed a good case for it.
Then Pierre-Claudes mother turns up, and we attempt a conversation. Some questions I just couldn't understand, oh well, but she did recommend the Monastery in Cahors, rather than the Youth Hostels. The trouble with Youth Hostels is that they're full of youths.

6:51pm
And I think I deserve a bloody medal for enduring the conversation with the Gite woman. Absolutely non-English, and I'm trying to make sense of a sentence from an understanding of a word in the middle of it. What the hell is "donnez manger" then, when it lacks any context? give me a meal? how am I meant to reply?

8:25pm
I've just been given a lesson in French etiquette. The family always eats together, and I shouldn't have eaten alone tonight. I could have joined them, Pierre-Claude and his mother. At the time though, I didn't want to presume I'd be welcome.

Pierre tried to book me a place at the place they're staying tomorrow night, but it's cômplet. Doesn't matter. There's two gites I can try. One's 500m short of Mars de Vers, the other one near Le Pech. I'll take the first one with a bed.

9:01pm
And the Limogne church bells have just chimed nine, I'm at Le Galopin, having the final Cafe Grande for the day. Feeling a little depressed. This is difficult. Not being able to understand people, always feeling like the outsider, always thinking that I'm doing something wrong. That I'm missing something, whatever that may be. Walking, finding a place, sleeping, doing whatever touristy stuff I can wring out of the meantime. The walking itself is fine, the gite here is excellent, the people have been nice, so I just don't know what the matter is.

9:19pm
Still here, and thank the Lord, they've just turned off the TV underwater documentary, and playing a Bob Marley CD instead, "is this love ?", as I stare down the road to where the gite is, wondering if my t-shirt is anywhere near dry yet. Probably not. Wondering if indeed it's still there. Probably.