Livinhac
8:21am
Already been on the road, with Anthony, passing farms, up winding paths, it's misty, and I think we must have taken the scenic route. Good. But every day seems to begin with a hill to climb.

I'm wondering if Champollion climbed this way, or walked past these farms. Maybe the key to the Rosetta Stone was cracked on this very way.

12:56pm
Somewhere near Carrefour. or something like that. Still some way from Figeac.
Stopped for lunch. As usual, I have the baguette avec jam.As usual, Anthony produces a neverending variety of delicious looking stuff from his backpack. Anthony's backpack is more like a mobile delicatessen.

7:58pm
Figeac
Maybe it was not wearing my glasses on a walk around the town. Maybe it was the can of Kronenberg, but I'm feeling utterly disorientated and disconnected. Feeling like I shouldn't be here.

Finally arrived here, feeling good. Maybe because I actually slept after lunch, in the field where we stopped. Must be turning French, by degrees. Short, vivid, dreams.

Into town, through the ugly outskirts, over the railway line, passing the office buildings, saying farewells again, getting photographed together.

Tried to find the Gite, but couldn't, despite a monster walk around the area where it's supposed to be. Found this place, the fabulous 1-star Hotel le Faubourg. I'm on the third floor, the one with the constant traffic noise outside, so it should be just like home. Washed the socks, on with the equally fabulous Decazeville sandals, and I'm off into town.

Found the supermarche, bought heaps. Bag busting amounts of stuff. I buy yet another baguette, and ask the chick pour l'sac, and she helps me place all the groceries into it.

Coffee, at some grungy cafe, so I felt quite at home. Then to the Office d'Tourisme, asking about Internet cafes. Yes, they have one, and they draw me a map. Left, then down, and it's on the corner. The only problem is that when I find it, a newsagency, the guy there has no idea of what I'm talking about. More wanders.

Cyber-J sells computer stuff, but see another place off a street called Cyber-K, and yep, it's the access cafe. 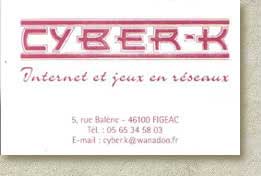 And, woohoo, I have eight new letters, and I wish I could reply, in kind, to the length of some of them, but I can't. They're great anyway, apart from the one's that aren't.
Another walk, feeling vaguely superior as I've just managed to withdraw another 200 euros, and meet Ana at the ATM. She's getting the train to the Pyrenees. Anthony's gone 5kms down the road to the next Gite, and while we're havin' a chat, we get "hello'ed" by some old, strange woman, and only Ana can understand what she's on about, and it's not much.
Well, then, bye, I guess, I'll probably never see her again. My Angel of the Road.

Buying a coke in a pizza place, craving anything cold. Then down to the Place de la Raison, drank beer, ate the tuna on baguette. Sat there quite a while. The Bavarian beer is powerful stuff, should try it more often.

Then back, somehow, even after successfully circumnavigating the eglise. Bells going, as usual, but no-one's home. Saw a few people from the Gite last night. The boy with the rat-tail hair and the shepherd's crook, others.