LePuy
If I was being smart, I'd be writing Lundi and Juilliet, but I'm not.

Been awake, on and off, since before 4.00 am. I know, heard the Cathedral bells ringing the time, twice on the hour.

Doubts. Maybe it's the choice thing, a feeling of being locked in, something that I can no longer change. Began feeling this way a few weeks ago, and which I now have to confront. Yes, I will do it. Yes, I will walk a bloody long way. It's not exactly a crisis of some kind of faith, but up until now it's been playing games. The 'When Does The Pilgrimage Actually Start' game.

Couldn't sleep. Thoughts of doubts. Stephen King may have invented the character of Travellin' Jack, the Walkin' Dude, but Stephen King just sits and types. All the songs about hittin' the road, and being on the road again, and the road just waitin' for my bootheels to be wanderin' were written by guys who even have their tour schedules are written for them.

Partly because I should have paid for this room last night, so I can leave early enough to get to the Cathedral by 7.00. Should leave here by about quarter to. Have to buy a baguette, which might be breakfast, lunch and maybe even tea. I'll need more water. I'd like another coffee at Place du Plot, but I doubt they'll be open. And there doesn't appear to be much in the way of shops between here and 27 kms away. Don't really want to walk that far today. Logically I should just ease myself into some kind of routine, but there's nothing logical about this at all. This is insane. Maybe I'll just see what happens.

5.55am
Getting ready, ridiculously early. Dumping the socks I've been wearing since I left, for here, last Saturday. Putting on the pilgrim socks. Two layers. One thin, one thick. Their debut in Pilgrim Life. Repacked the backpack, in a minor way, things I think I might need at the top.

6.14am
Aiming, today, for Saint Privat d'Allier, 22 kms. Doesn't appear to be any real alternatives.

6.22am
Waiting in reception, to pay. I could do a runner, easily, but I suspect that would not be an auspicious way to begin the pilgrimage. Maybe if the concierge guy is not here by 6.45, I'll just leave the cash on the counter.

6:24am
Nope, I don't think ringing the desk bell is going to hurry anybody up. From now on, I'll be paying the night before.

6.26am
It's a very touristy town. Saint James seems like a fortunate bonus.

6.45am
Cathedral. Puffing. Catching breath. Left 40 Euros on the counter in reception. Seems symbolically right. Paid most of it, cheated him out of 3 Euros. Can't be helped. But walking through the streets, to here, it finally felt right.

A nun is lighting candles. She wears a grey habit. Two other priests are here, one in white, the other in green. Everything is quiet.

after 7:10am
The service has started, but I can't understand much of what's being said.
"What was that ?" I asked the woman beside me.
"Go for it," she answered back.

Trying to follow the French service. I'm holding my guide book. I think I hear the word 'pelerin'.

"What was that ?" I asked again.
"Special service for the pilgrims, leave your stuff here."

So, the pilgrims gathered, the ones intending to set out this day, most on some kind of package tour, speaking in French. I blurt out "I'm from Australia, and I begin my pilgrimage to Compostella today." Before I know it, my words are being translated into French by someone, another pilgrim. The priest said something like "Good Walking". I'm given a tiny silver pendant, by the cute grey nun. I tuck it into my wallet.

The woman minding my stuff mentions that I indeed have the best guide book ever, and then, that she wrote it. I'm totally dumbfounded.

I invite her for a coffee, and she accepts. So, the actual beginning I walked with my guide. We have the coffee, not at the Place du Port, as it was closed after all, but up another street at the end of Rue Saint Jacque.

Things have changed since my guide book was published, apparently. Nothing really major, but a new edition is planned. Means she'll have to walk the Camino again. Talking about other stuff, Camino stuff, and there's no bad dogs in Spain. I'm relieved to hear it, but can't totally believe it. We leave, walk past the Gite I tried to find yesterday, but couldn't. Then she points me in the right direction out of town. I go. 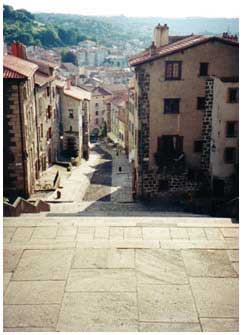 12:46pm
Chapelle Saint Roch
And everything since leaving the hotel has been perfect. Utterly, completely.

Have baguette, have l'eau, will travel. Walking, to LaRoche. Soon, a "Boisson Gratuite" stall appears, run by two cuties and their brother. Citron et le peach. Dunno what 'peach' is in French.

To Saint Christophe.
Rang Home. Walked the rest of the way with a really experienced walker, I think his name is Ottery or something. He's good company, and his English is way better than my French.

Stopping by a fountain at Ramourouscle, and despite Otto saying that no local would drink the water from it, he fills up his bottle like the other two walkers did. I just cooled myself down. Something cold would be nice though.

To Chapelle Saint Roche, stopping for lunch. The second half of my baguette,

It's good weather. Montbonnet is only half a kilometer away, it's only 1.00pm, I'll walk further, and there should be an ATM there, and a pub, and a gite.

Today, so far, I've walked on main roads, not main roads, cathedral steps, real cobblestones, tractor pathways, glens, a small foret, through fields, over what looked like goat tracks, and other paths where you have to use your imagination to see any track at all. 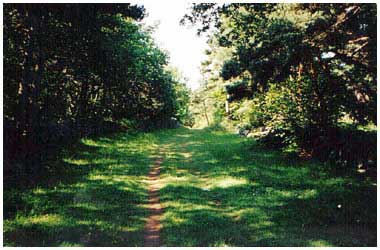 1:10pm
It's become a little cooler in the last ten minutes, darker clouds are rolling in, doesn't look vicious though. It's been warm so far, perfect walking weather.

1:12pm
And a jet fighter just screamed overhead. Nice contrast between this 13th Century chapel and jet fighters. Bizarre, Thought this kind of thing only happened in England.

1:20pm
And an old guy just rocked up, with a Breton flag on his walking stick, and I think I've just been called a kangaroo.

4:20pm
Saint Privat d'Allier
At the Gite d'etape (which I learnt rhymes with 'tap'), and while Otto has gone off to sleep in a tent somewhere, I'm sharing a room with the Breton guy.

Anyway, bought water at Montbonnet, yes the non-gassez sil vous plait, to La Chier, which sounds easy enough, but the climb was steep. Sweat poured, well, a few drop of my forehead anyway. Finally got to the top, and La Chier was the most charming place, every building three-storied, and in stone. Deep cut stone, just huge. And after the climb but before the town, the view spreading out hugely. If photography could do a landscape justice I'd have taken a panorama, but it doesn't.

Then the treachery of the section that leads down into Saint Privat, trickling water, over rocks, I think this must have been the section that Andrea Kirkby describes as so bad that swearing just isn't enough, although she did her pilgrimage in Winter. If it wasn't that section then there's a few pleasantries to come.

My shoulders ache a little, I think I may have been bitten by something on my left hand, nothing too serious, just tingles. I slipped once, lost the footing but not the balance, but haven't found anything threatening dog-wise. Otto suggests dog-soccer. Yeah, I'd be in that.

4:36pm
Just thinking that if it's true that I'm not supposed to wash the thick outer socks, then by the end of this they'll be toxic ...

5:10pm
It's not Otto, it's Anthony, and it's pronounce Ontony, and the Breton guy is Jean-Louis, and tomorrow's destination, Saugues, is pronounced Sog. And Jean-Louis is telephoning ahead to reserve two beds at the Gite there. Just had an interesting conversation with him, half-English half-French, lots of silences as I'm trying to latch on to any word that might give me some clue as to what he's on about, again, his 'bad' English is far better than my terrible French. I think I must sound like a child.

5:35pm
He's going to an enormous amount of trouble. I don't want to walk with him tomorrow though, in fact, I don't really want to walk with anyone. I'll leave early. Anthony was okay though, he was quiet. But I suspect all Jean-Louis actually wants is a pet kangaroo.

6:17pm
I think this place is called Chez Bruno, but I'm having a coke out the front of it anyway. Whatever, it's better in the shade over here than over at the Hotel Chambon/La Vielle Auberge, where all the old farts are staying.

And a loaded up donkey, with father and son in tow, is being led down the street, thought this went the way of Robert Louis Stevenson, but apparently not.

Booked in at the gite, and yes, sweetie, I am from Australia, and I got here by walking and swimming, and yes, my ancestors were convicts. Strolled around the town a little, mildly tempted by the Tour Anglais, whatever that is. It's Lundi, and most of the places are shut, and for some reason I said "non" to "le petit dejeuner" tomorrow morning. Don't know why, just did.

8:33pm
Jean-Louis is making a phone call, something about tomorrow night.

And now, everybody is "bonsoir'd" instead of "bonjour'd". When's the dividing line? Oh well.

I need a supermarche.