Roncevalles
early
Got to wake about 70 people up at once by accidentally flipping the light switch. Didn't care, it was after six and they should have been up. Anyway, I was up.

Began, walking with Philippe, and following the blonde Danish chick. Yes, Philippe, she does have nice legs.
Then, to hear the word "shithouse" as a reply when I asked Zarah how her feet were, then her clarification of "utter crap." Pronounced exactly right, as only an Australian can say them.
Got to see the Frenchies get really snotty as they quickly realized that not everybody on the planet speaks French, and, in Spain, they're in the minority. A small minority. 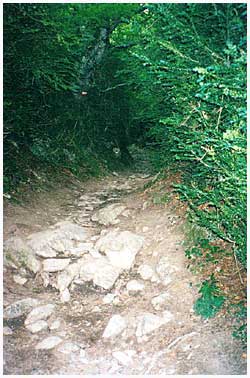 9:33am
Speaking of such, the Frenchies just walked past. Philippe and I are at a bar, having coffee and a 'creme chocolate'.
This is great.

12:10pm
Zubiri is still two hours away, apparently. Not large walk, but a difficult one. After the iron pilgrim road, now walking on shale. have to be careful.

2:45pm
Larrasoana
The competition for beds in the refugio's is really just that. A competition, and it's unpleasant. The walking is great, but the endings are awful.
The refugio in Zubiri was closed, as expected. Festia time, and the noise meant that it would have been impossible to sleep anywhere. So we caught a taxi. Cheated again, I guess, to Larrasoana. Philippe, Theresa the Danish chick, the apparently Notmother, and me. Taxi Pilgrims.
But the refugio here is already cômplet with wall to wall flaked pilgrims. Mattresses on the floor. Somehow the Frenchies are already here, bejaysus, they must have forgone the obligatory two hour lunch and run here. Maybe they're turning Spanish.
I don't want to run, I do not want to become destination fixated, but just to enjoy it. If that means a refugio, then so be it, or if that means a private albergue, then so be that too, or if it means sleeping in the undercover carpark outside this refugio where others a claiming a space, then likewise. The latter is a real possibility for tonight.
Anyway, while the hospitalero at the Larrasoana refugio is sorting things out, we're in the bar. Philippe speaks Spanish, somehow, so was able to talk to the hospitalero. I'm jealous of Theresa's fluency in six languages. They make phone calls, they hassle people, and sometimes I have no idea what's going on.

But tomorrow's short. To Pamplona.

3:30pm
Still here, having a Heinekin. The private refugio is 18 euros per person. Screw that, it's decided.

5:52pm
Sometimes my own tiredness surprises me. Two foam mattresses are laid on the floor, and while the other three take turns in showering, I lay on one and instantly fall asleep. Waking up when it's my turn in the shower. Feel better.

9:47pm
Tea. Another Menu de Pelegrino, except this time you got to choose what you wanted. Try melon with ham for starters. Two enormous slices of melon draped with a slice of ham. Now there's a combination I've never put together before, but it's great. Then 'steak', thin, doesn't really look like a stake, but, hell, I'll appreciate any cultural differences. The frites are recognizable frites though. Then the main show. Dessert. The guy bringing out the choices; yoghurt, apples, bananas, oranges. You didn't get your choice until you could say it in Spanish. Luckily, orange, in Spanish, is orange.
Then coffee.

And it's raining, or, at least, it was. Thunder, lightning, the whole shootin' match, and a somewhat tortured conversation out the front with Notmother. Turns out she's German. Dunno what the story is there, how they came to be travelling together, but Philippe, to whom absolutely anything is possible, is now at the holding hands stage with Teresa.
There's a lesson in that.