9:58am
Intended to be at the Cathedral by now, but whatever. Walked to the Hostal, not using the map, just using where I knew the river was, and followed it. Easy enough. I don't get the room 'til later, but they've let me dump the backpack.

Wanders. The Hojaldres Alonso, cafe solo double, and what I think is a complimentary pastry thing, and there's a song on the system, the one that has the lyrics "I don't want to see a ghost, rather have a piece of toast, Life...oh, life, doodoodoodoo", which just has to be right up there with the dumbest lyrics of all time. 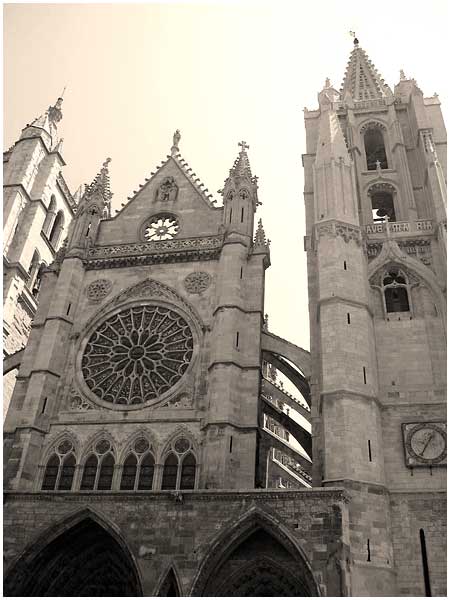 Reading the Pilgrimage Road book, first following the descriptions that explain what I'm seeing, then just sitting and looking, and sometimes seeing. Stained glass, three levels of it, massive, can't see the details in the high ones, just colours. Looking into the chapels. More crucifixions and Virgin Mary's and Magi's and people with haloes and yet more Saints.
Paying the 3.50 for what I thought would be a wander through the Museum and the Cloisters, but which turned out to be the guided tour. In Spanish. An entire room of Mary's, another room of crucifixions, some material from the previous incarnations of ecclesiastical buildings on this site, some palaeolithic, then Celtic stuff, Roman stuff, and more. Paintings, sculpture, wooden carvings, going on and on.
Then to 'Zone 1', Santiago Matamoro, the life-size Death, vestments, modern paintings, then the ornate Cloisters busy ceilings, and walking over the tombs.
I've been a few hours in here. It's great, although I feel like I'm yet another tourist doing the same things every tourist does. Get to the object of the destination, in this case, the Leon Cathedral, and virtually get bored by great art. 13th century and 15th century Gothic mixed, the burgeoning influence of the Renaissance. Well, ho hum.
Still wishing that JC had led a more interesting life. Maybe including JC learning to read, JC making his first ashtray in ceramics class, JC hangin' around the bars of Jerusalem, JC gets his first set of wheels, JC leaves home to go travelling, JC meets the Buddhists down in India, JC has Buddhist girlfriend, JC leaves Buddhist girlfriend barefoot and pregnant, JC is beaten by irate Buddhist father, JC goes home again. Now, I reckon there's at least a couple of millennia worth of interpretive art right there.

1:10
And glory of glories, praise the Lord, and we'll sing hallelujah, the miracle just happened, right here in Leon. The 'Galatea Libreria Ingesa' bookshop just revealed itself. Just down from the Museo de Leon, with an entire wall of books in English. And it's the quality stuff. Lordy, I'm totally spoiled for choice here. Bought 'Zen and the Art of Motorcycle Maintenance'. I've read it before, but it seems an appropriate book to read on the road.

Down to Pans, the fast food restaurant of choice, having the 'Extremeño'.

4:05pm
I think you can measure a city's greatness by how many Internet Cafes it has. So far, in Leon, I've found three. Cyberhades yesterday, which was actually more Internet Games than it was cafe; then the place pointed out by the Tourist Office this morning, which actually seemed more like Internet Post Office, complete with rows of telephone cabinets, and a bank of computer terminals. But the third, the Bluenet, is an Internet Cafe. Yes, you can cafe there, internet there, watch movies there, you can even cafe while you internet and listen to the sound of the movies if you want. Hell, I just did. After the Cathedral, the Bluenet is the closest thing in Leon to heaven.

In a bar, just up from the Bluenet, and an old woman is occasionally telling me things, but I have no idea what, something about a serviette I think. In here, there's Elvis memorabilia, LP covers in a row on one wall, Elvis Rock'n'Roll and 'Terrot', whatever 'terrot' might be.

4:32pm
Waiting for what's probably the second incomprehensible guided tour of the day, this time of Santa Isadoro. Just paid the 3 euros. Maybe I'm supposed to be tempted by the books and postcards that are for sale, and there's quite a lot. I suspect that maybe the 'no photography' rule isn't so much for the preservation of the Art, but for the sale of these books. I can understand the specialist books on Santa Isadoro, but why the hide-bound copies of Aristotle's 'Ethics' and 'Political Economy'? Is there a connection here? Sounds like an exam question, who inspired what here?

6:10pm
Now that was a bonus, as I basically got two tours for the price of one. The church with the painted ceiling, to the Museum, to the Library. Then somehow, from the Library back to the church again, and the guide, Lola, insisting that the tour wasn't finished. Well, my first tour actually was, but I'm hustled back inside. The second tour was better anyway. Was seeing this time, not just looking.

Finally out, after nearly getting a third time through, but this time Lola actually pointing me in the right direction, to the bookshop. Bought some postcards, then out.

7:15pm
Down by the river. Loud noises, like explosions, in groups of three, but nobody else seems too concerned, except the dogs and the pigeons.

8:40pm
Over the San Marcos bridge, passing the San Marcos Hostel, and I suspect it's more of a wedding factory than anything else. Two wedding on at the same time, a third in the park nearby. Walking up to the Cathedral, again, just sitting in the Plaza del Reglia, just watching the Cathedral. The sun has set, and has stopped playing with the carvings in the three tympanums. It puts them into high relief, which moves and then fading gradually.
People, and lots of them, also in the Plaza. Some are dressed up. In fact, in Spain, most people are dressed up. I suspect most Spanish men wouldn't leave home without serious grooming and careful attention to their ensemble. I feel like a slob in comparison. Maybe, in this part of Spain, they just think "there's a pilgrim", rather than "there's a slob," like they would in France.
There's six women crossing the Plaza,in heavy Spanish costume; and over there, an obviously German pilgrim with his copy of "Jakobsweg", the German guide book of choice. The Cathedral bells dong for 8:45, and I'm wondering how they manage to keep the Cathedral spires stork-free.
But I was wrong about the measure of a town's greatness being the number of Internet cafes. The true measure of a town is if it warrants its own 'Petit Train'. There's one here, just went down the street leading into the Plaza. Not many dickhead tourists on this one, guess it's getting late, but during the day the trains have been packed, with tourists video-ing every precious moment as they choof passed. Wondering how many times that particular piece of video footage will get watched later.

"Hmm, dear, and what shall be our viewing pleasure this evening ?"
"I was thinking maybe 'African Queen' perhaps."
"Hmmm, I was thinking of maybe 'Leon Cathedral From le Petit Train'"
"Wow! How could I ever have forgotten? Just give me a moment to turn the mood lights down ..."