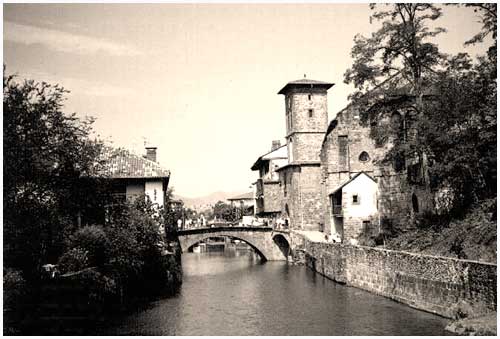 7:10am
Breakfast, although I've already been out, finding a telephone box. Knew where it was, near the bar I'd had a beer at last night, just had to find it again. Rang C, "Guess where I am !"

At the table, everyone is very clean. Their t-shirts are white and freshly ironed, barely a wrinkle anywhere. They're just rarin' to go, or maybe not, I guess if they really were rarin' they'd have gone by now.

My legs still ache, first time I've ever had some kind of hangover ache. It's usually disappeared by the mornings. So, today it'll be lots of hot showers, lots of magic ointment, and lots of doing nothing in particular. Although my planned 'nothing' days have a habit of turning into quite something else days. I'm hoping there's an Internet Cafe somewhere.

I met a pilgrim named David at l'petit dejeuner, who I thought was French, but turned out to be English. Chatted a while, and he didn't know where LePuy was either. Spoke about things Irish, about walking, other stuff. He left late, but I hope to meet up with him again. But probably he'll always be a day ahead anyway, Oh well.

And apparently there's some kind of meeting, a rendezvous, at the Cathedral at 12:30. Saint Francis, Clementine, Guy, and me. Maybe it's just lunch, I don't really know. Whatever.

11:26am
Gite
Been slow walking around town. Touristy-type shops, and real-type shops, and managing to find most things, Buying a new diary, more sticky-tape (which is called Scotch here), some chocolate bread, and finally to the chocolaterie next door. Bought two, a 'Fusilier d'or' and a 'Montilemor Noir', which I'm going to have just as soon as the jug boils. They taste better with coffee and I'm going to savour them slowly.
Couldn't find cotton. Don't know what the French, or the Spanish, for 'cotton' is. Have to get the seam fixed in my trousers, before it gets worse. But it's a tourist town, and such things don't exist.
Found the Post Office, mailed a few things home, and some postcards. But everything is Basque here, every possible permutation of anything even vaguely Basque can bought en masse. Berets, in any primary colour; towels, hats, posters, crockery sets, postcards, keyrings, whatever.
Found the classic view of Saint Jean, the river and the two bridges. Strange, must've walked over one of them yesterday, from the Amis de Saint Jacques to the gite, but barely even registered what it was.

There's a watercolour artist in the street near the Amis de Saint Jacques, just painting the scene, he's been at it for hours, but the painting will undoubtedly be sold by this afternoon to some tourist who decides they can no longer live without this particular memory of Saint Jean Pied de Port.

Hmmm ... the Montilemor mmm .. quiet delicieux. I think it might actually be my favourite.

11:42am
But the Fusilier ... now that's something else entirely scrummy.

12:20pm
Visited the eglise, but mainly just read the first few chapters of 'The Pilgrimage Road to Santiago', which I've carried all the way so far, and now coming into it's own. Reading about what's on the way to Roncevalles.

1:30pm
It's a pique-nique that's been planned, apparently. We're in l'magasin, after having chosen our 'sandwich' - a baguette filled with either jambon et fromage, or crudities. But, we've been blessed again, as Superpilgrim has joined us for l'pique-nique.

3:44pm
Fell asleep, on the hill overlooking SJPdP, and when I woke up, Superpilgrim had already gone. But, on the other hand, Linda's turned up again, haven't seen her since Livinhac, and she's waiting for Anthony, who's due tomorrow. Pity, we'll be gone by then.

10:05pm
I met Philippe at tea, speaks English, as well as French and German. I think Philippe is the coolest guy I have ever met in my entire life. Giving me confidence in who I am, and confidence in The Way, and that you have to balance your own Way with the idea of surrendering control.