Fromista
6:48am
Lightning every so often. I'm hoping that doesn't equal rain. Began the walk by heading towards the full moon, slowly disappearing, fading. It's windy, but good. Just enjoying whatever. If it's windy, then it's windy, if it's hot then it's hot. Just enjoying the 'be here now'. Still, I should get the raincover closer to the top of the backpack. I have a hunch I won't need it. This might be overly optimistic.

7:40am
Población de Campos
Cafe con leche. In a cafe bar. The news is on TV, showing images of torture in Peru.
No rain, yet. there's still lightning over to the North though. 9kms to the town of miracles.

8:28am
Revenga de Campos
Not quite the town I was expecting, Villavieco, but what the hell, it has a rather nice pilgrim mural painted at the entry to the town. So, it's okay by me.

8:58am
Villarmentero de Campos
Another town not mentioned in the guidebook. Maybe I'm on another Way, or a newer Way.

9:03am
And out on the other side of Villarmentero. Not much to the town. The bar was open, a kind of half building/half canvas type thing. Two guys drinking there. The business is for sale. Not tempted. Not even for a drink.
But hey! It's back to the wheatfields. O Frabjous Joy.

10:07am
Villalcazar de Sirga
In a bar, opposite the iglise, the Santa Maria la Blanca. A service was on, but didn't want to stay, the look around beforehand was enough. Arrived, sat down in a pew, rested my head on the back of the pew in front, and the tiles on the floor began swimming, endlessly receding, like a slow whirlpool, or some kind of vortex. The more I looked, the deeper and clearer it became. 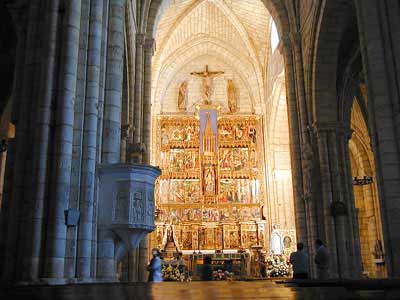 Looking at the retablos, the one behind the altar. The chapel of Saint Jacques, with details of his life, his battles with the sorcerer, Hermogenes, who, after his defeat, converted (naturally); then the decapitation; then the stone boat. Other chapels, the sepulchre, other stories, other tombs, including the one of Felipe, the brother of King Alfonso X, who was a good man. According to the story in the Pilgrimage Road:

11:52am
From Villalcazar, walking with Pablo and two other Spanish people. I don't know their names, but we've been 'ola'ing' each other for a few days. Walking the last 6kms in company was good, although, at times, a reminder of why I prefer to walk alone.

Walking into Carrion de los Condes, saw the NZ chicks, they're still bussing it. To Leon this time. I hope they have the decency to get a hotel room there.

12:08pm
Glad it didn't rain, despite the ominous beginning.

1:35pm
I swear the main drag of this town is a circle, no, a spiral. Visited the main iglise, being a good pilgrim. It's kind of nicely grungy.
But I know where the three supermercados are, passed 'em often enough trying to find my way back to the refugio. And I know where I can go if I ever get the urge to indulge in some karaoke. In fact, I think there's two karaoke bars in town, totally identical, one at each end of the main street, just to confuse people. I know where I can buy all the Car Care products I might ever need, not to mention souvenirs by the tacky dozen, I certainly know where all the cake and lolly shops are, and I know where the farmacies are, and where the Santiago Museum is. I think they could just photograph my calloused heels, and display them.

3:00pm
Finally managed to get showered. Some of the refugios only have one shower, but this one provides two. Such luxury. One for senoritas and other for caballeros. I don't know what some caballeros do in there that takes so goddamn long, but it cannot be natural.

Next bar, the Cafeteria los Condos. At the next table is a really old man in a wheel chair. He's immaculately dressed in a suit, and wearing a beret, and looking almost jaunty. He's being spoonfed custard by a woman who could be his grand-daughter, maybe great grand-daughter. He looks as though he still has all of his wits, just not all his physical faculties.

Down the street there's a carnival being set up. Carny shows, dodgems, and all the fun o' the fair.

3:53pm
The Cerveceria, which I think roughly translates into 'the Beeria', I'm not sure. It's very loud. Apart from the music, which has the bass turned up, there's a customer over there, suckin' on a cigar, and the bar chick obviously can't stand him, and he's holding forth on some topic, being ignored by everybody, maybe they're all pretending they can't hear him over the music. Then there's a group of boyos at the table behind me trying to talk to each other, but having to yell to be heard over the noise of the four girls playing table-top soccer, quite violently, no holds barred, thump! thump!, yay!!

No, they've just finished their game, collected their things, and left, so it's quietened down considerably. Now, over there, another guy is feeding a pokie, and not having too much luck of it. Cigarman is still holding forth, occasionally getting the attendant's attention. She smiles through gritted teeth, and quickly moves back to the other end of the bar.

5:00pm
Things are beginning to move again. And okay, I've paid my euro to the Museo de Santiago. Religious relics, looks like an assemblage of stuff salvaged from deconsecrated churches. Saint Jacques statues; Saint Roche, who looks much the same, crucifixions and pietas, priestly robes, really large books of music, processional things, a room full of keys hanging on the walls, infant Jesuses, a dead Jesus in the middle, stations of the cross, Jesus on a tree, Saint Francisco, otherwise known as Francis of Assisi, a replica Saint Jacques in pilgrim costume.
To be truly authentic, my hat should be dark brown and turned up at the front, with a scallop shell on it, I should have a dark brown cape, fur lined, also decorated with scallop shells, and a really big stick with at least one gourd hanging off it, and I should walk in sandals.
There's photographs of of Pilgrim Extraordinaire, who actually dressed like this. In fact, signed photographs of him are in many of the refugios along The Way, I guess he's another Superpilgrim, except this one has more decorations, including every souvenir pin you can buy is adorning his hat, while his stick not only has gourds, but shells and crosses too. I'm wondering where he keeps his sleeping bag and spare undies and rain-cloak and bandaids and toothpaste and the stuff you really need.

5:46pm
And up the winding wrought-iron staircase of the Museum to the top of the belltower. The way up is lined with the kind of metal crosses that are so evident along the Way - particularly in France, but different shapes, different decorations, variations on a theme. The real things, in situ, usually have piles of stones around, or on, them. They're prayer stones.

6:12pm
I suppose I could have visited the other iglise, but enough is enough. I don't think I could stand another crucifixion.
Tried to buy more elastoplast. Found a 'drogerie', but I'm shown plastic bandaids, heel supports, and once they'd moved various cans of paint and weedkiller out of the way, produced bandages. "Non, gracias," and I'm out of there. Then, tried to find somewhere with an internet connection. Down to the Tourist kiosk, and get told, yes, there is one, and shown on the map exactly where. It's in Plaza de los Caldos. So, go there, and there's a place with computers in it, but it's not the right place. The right place is next door but it's "closed for holidays." Damn.

7:20pm
Been reading the guidebook, checking the updated lists of refugios. I have one day with a 10km walk. I hope they let me stay, after the experience of Logrono, you can never be sure.

8:40pm
There's a Fiesta on in town, but I was kind of expecting more. There's carnival rides, the same hard-bitten type carnies, the bored, slightly-too-old-for-this kids on the merry-go-round, others bashing into one another on the dodgems. A sloppy brass band leading some dignitaries from the main Plaza Major, around the corner, and up the street to a theatre. The dignitaries enter, and the band stops playing. The band, then, hits the nearest bar. That's it, and I'm really disappointed.
I was expecting something like a full-on Carmen played out in front of me, You know the kind. Sharp shark-eyed type eyes off pretty slut on the other side of the room, a brief encounter, she goes off, he grabs her violently, then they dance like crazy. That's what I wanted to see.

later
But Pablo has just explained that at 10:00 there'll be a single firework, a skyrocket, the signal for the young people to let loose, drinkin' and dancin', and rockin' to the band. Damn. Refugios lock their doors at 10:00. If you're still outside then you have to find somewhere else to sleep. I'll miss it.

9:05
Cafe Sol, over the road from the albergue. Last coffee for the day, feeling a little depressed, even envied the kids playing on the trampolines down at the carnival. There's a moment, on a tramp, when you are perfectly suspended. Weightless, like flying, and definitely closer to the angels.