Rabe
7:00am
And as the fake bells toll, I'm on the road again. I've got some serious soul-searching to do. Bring it on, soul man!

8:35am
Hornillos
Locals out sweeping. Must be a Tidy Town thing, the locals in Rabe were doing the same thing yesterday.
No blinding flashes of insight into my soul, yet.

9:17am
According to the guidebook, this is the roof of the world. On top of everything. A great walk, really. The meseta is supposed to be devastating, but I just found it wonderful. Almost totally alone, passing the guy from Madrid that I met last night, then the old guy from Quebec, "bonjour'ed" him, then passed. Feeling good, about myself, about what I'm doing, about the landscape I'm walking through - it virtually doesn't change at all. The road was good, easy walking, maintaining a steady pace virtually the entire way. Thinking.

11:01am
Hontanas
Hontanas itself just suddenly appeared. A slight hill, then a slight valley, and in the valley the town, the church tower appears first, then the rooves of the houses. Magic. Another quiet town. I'm hoping there's a telephone somewhere. haven't seen one yet.
Appear to be the first in the queue at the refugio. had a cafe solo double at the first bar in town, which I suspect is the only bar in town. 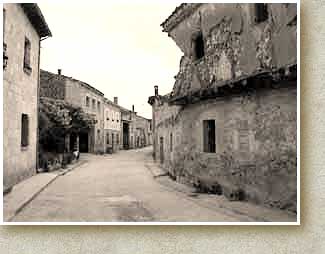 11:25am
Nope, not a telephone in sight, just a rusty sign pointing to 'Telefonos', that actually points to a nowhere place.

1:50pm
Actually, there is a phone. Here's the directions to it:
1. Ask at the reception in the refugio, and the answer will be something behind the eglise.
2. Wander behind the church, and find a man who will out sunning his arms on his verandah.
3. He will then walk you to a corner, where he will summon two boys out strolling.
4. He will go one way, and you will go with the two boys.
5. Walk up a street, turn the corner to a house.
6. You enter the front door to the house, and to your right, in the corner, is the public telephone.
7. Except it's not really a public telephone, it's just a handset.
8. Endure the pathetic attempt at making withering glances by the people who live in this house, if you dare talk for longer than 10 seconds.

Must be a Spanish thing.

later
Washed the stuff, and it's all hanging on a clothes rack in the main street. I'm glad I swiped the pegs from the Hostal Garcia.
Met a French guy, Christian, who's been doing the walk in stages. He began at LePuy two years ago, walking to Burgos, Now, the second stage, from Burgos. Today, he's done 32kms. Must walk fast to be here now. He's been telling me about the Saint Jacques church in Paris, in Rue Santiago. Well, I might visit it when I'm back in Paris, but more likely I'll be worshipping at the Shrine of Virgin Records instead.

3:12pm
Okay, there's a local guy in this town who's 'famous' for his party trick of being able to pour a glass of wine onto his head, have it trickle down his face, and then into his mouth. He also runs the only bar in town. Unfortunately, he's also a dickhead. This morning, he knew what a Cafe Solo was. Just asked, that was it, no drama's whatsoever. This afternoon, after his bar reopened at 2:00, he appears to have completely forgotten what coffee is, and became quite animated in his utter non-comprehension of what a Cafe Solo might be, he kept pointing to his mouth, as though maybe a Cafe Solo was something you might eat.

Oh well. But, despite being two days into the Way of Death, and survived the most soul-searing part of the Camino, I'm feeling none the wiser. Same thoughts, same songs put themselves on repeat in my head. I was hoping to radiate. If a full-on shine was a little too much to hope for, then maybe a faint glimmer would've been appreciated, but no, not to be. I'm imagining myself with the glow of a wise man, to be truly at one with the Universe, to at least understand something I didn't understand before. Maybe I'm resisting it somehow. I don't know. It would be nice to add something to the list of "things I know for certain". Maybe I should abandon that list, and start again.

3:43pm
At the other end of the town there's a swimming pool. It looks deep, and blue, and inviting, and utterly devoid of people, despite being surrounded by young things, and people who've bought drinks from the bar. Yep, it's gotta be a Spanish thing. Have a few beers, then take a dip maybe, a few more beers, then lie in direct sun for a few hours. Maybe just forego the dip thing entirely.

Still the refugio's brilliant. It's actually a restored pilgrim's hospice. There used to be hundreds of such hospices along The Way, for the sick and tired and dying pilgrims. I hope they appreciated them, as there's not many of the originals left. Although, there's probably not much, except the facade here, that's original about this one. Yet, the heavy blocks of stone mean that it very cool, literally, on the inside. It's hot out there. Mad dogs, Englishmen, and now you can add Spanish pilgrims doing the Camino to that list.

5:30
The dickhead is Vitorino. According to his sign "you can have a nice meal" at Vitorino's. The problem is, Vitorino's is closed. Maybe Vitorino has totally lost it.
Up the street, outside the iglise, in the shade, five women are playing cards on a foldaway table, they're using brown beans to gamble with. Dogs wander the street, usually little ones, one big one, but it's harmless enough. haven't come across a really nasty one in Spain yet. In France, yes.

There's absolutely nothing to do here. There's a load of pilgrims already booked into the refugio, it's filled up during the day, but apart from the sleeping ones, I have no idea where they all are. Maybe they're down at the pool, drinking and drowning. They're certainly not in the iglise, as that's closed. May be they're all out trying to find the telefono. Christian, the French guy, is trying to find a stamp, so he can mail a letter home to his wife. He showed me. It has the map of his walk today, with a few notes on the back, and apparently I get mentioned somewhere in his letter somehow. Probably along the lines of "there's this idiot Australian who didn't know of the Saint Jacques church in Paris."
There's two pilgrims from New Zealand. If Guy were here now, he'd be utterly confused. Guy, for my sake, would get all excited when the All Blacks had a victory. Maybe his geographic knowledge of anywhere outside of France is limited, and I couldn't explain the difference between NZ and Oz with my limited French. To him, they were one and the same.

8:20pm
A couple of beers with Christian, up at Vitorino's. Vitorino has suddenly remembered his purpose in life. Then Christian starts out on the Biblical stuff, he's definitely doing the Camino to prove his faith. He began with a pre-existing idea, and now he intends to prove it to be true. He's telling the story of Jonah and the Whale. How God apparently told Jonah to "go East, to Ninevah, and tell the people there to pray!" Instead, Jonah went West, got thrown into the deep end, swallowed by our whale, then spat out. He then suddenly remembered God's actual words, and went East. Now, apparently, this parable, to Christian, explains the nature of The Way. We are walking West, and heading daily towards death; and when we finish the Way, we go East. So, according to the interpretation that I've been listening to, this is some kind of rebirth. I mentioned that the ancient Egyptians held similar beliefs, so the talk suddenly changed to Traveller's Tales.

later
Made tea, in the kitchen. Other pilgrims have ordered their meals, paying 7.50 euros for it, and there's a woman and her daughter making meals, but it's okay to make my own. The daughter sits and reads at the table. Anyway, my pilgrim extravaganza of noodles and tuna. And during tea, met Macpilgrim, from Scotland, a Glaswegian, but who lives in London. Talking, and he's been to Australia, and was really impressed with Perth. Totally taken with the layout of the city. Perth? Bejaysus, you'd have to follow the West Coast Eagles. I think not.