8:20am
Villabilla de Burgos
Sitting on a stone bridge over a stream, thinking about this morning's walk. Leaving Burgos at about 6:30, from the Hostal Garcia, left, then following Avenue Generalissimo, like I have to, over the bridge, as I had to, then got utterly confused. No arrows anywhere. A old nun, in grey, appears, tells me something which I hoped meant 'this way', and she walks with me, for blocks and blocks, to the Burgos refugio, the one that's about a kilometre out of town, where the arrows begin again.
"Muchos gracias," I say, "Muchos, muchos gracias,"and shake her hand. She says something in reply, which I hope meant "Give the apostle a hug for me." As I intend to. I'm on my way, again. Beginning today's walk, with a grey nun, is a rather ominous way to begin what's apparently the first day of my death.

8:30am
Actually, for a partially dead man, I'm feeling pretty good.
There's a train line running parallel to The Way in this section. Goods trains, passenger trains. They're great, but I guess it's a bloke thing.

later
Tardejos
Walked with a Spanish pilgrim for a while, can't remember too much of the conversation. But both of us looking for the shop that's supposed to be here.
Must've been a fiesta here last night, there's stuff everywhere. Still, found the only shop, and stocked up on essentials. Oranges, chocolate, and tins of tuna. There's absolutely nothing at Rabe, apparently. 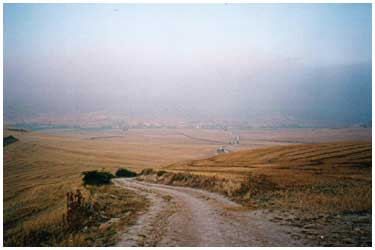 10:45am
Rabe de las Calzadas
Feel like the day has just begun, and I'm already here. Introduced myself at the refugio, despite being told that there wasn't one in this town earlier. Well, yes there is. Pity it doesn't open 'til three. Nice enough town, and for some reason the wait doesn't concern me. Happy enough just to sit and read 'til then, then after that, just sit and read some more. No obligation to do anything touristy. May wander down to the eglise if it opens. If it doesn't, then I may just wander down there anyway. Whatever, it doesn't matter.

There's two old guys, locals, who are wheelbarrowing wood from one place to here. Looks like wood from a demolished house.

11:30am
The eglise was open. Wandered in, and a service was starting, so I stayed. Just sat down the back, and followed the others. Sit. Stand. Kneel. Stand. Sit, and so on. The priest wearing green. I think his older offsider may have Parkinson's.
There's a small retablo, and something that looks really old on one of the walls.

1:25pm
I seem to have been adopted by the old guys of Rabe de los Calzadas. They only speak Spanish, but one of them seems hugely informed about Australia, and he's holding forth about everything. I have no idea what he's on about, but at least the only thing the other two know is that it's surrounded by water. At least, the word 'agua' gets repeated, again and again.

1:46pm
Anyway, back to Wuthering Heights. Heathcliff has just taken possession of his son.

7:32pm
Basically just sat and read 'til about 3. Checked in, helped the hospitalero and his wife bring in the groceries they'd bought in Burgos, then showered, washed the stuff, then slept.

Then read. A few other pilgrims have arrived. The hospitalero decides we need to look at the eglise. It's locked, but he has the key.

Otherwise, the entertainment for the locals seems to be gathering around the fountain, stroll around it, then stroll up a street, down a street, and end up back at the fountain. There's old people, young people, kids in prams, kids with toys. I guess it's the Rabe version of the Burgos evening spectacular.

But, it's been good, and I'm really surprised at how quickly the time passed. Just reading Wuthering Heights, nearly finished. Heathcliff is keeping the younger Cathy and Nellie virtual prisoners, until the young Cathy marries the young Linton.

9:43pm
At dinner, in the kitchen of the refugio, which is actually in a house, we all had to introduce ourselves. There's only 5 pilgrims here, saying our names, where we are from, and our reason for doing The Way. According to one pilgrim, the guy from Madrid, tomorrow, on the meseta, is where the most intense soul-searching happens. Maybe this will be the change. Who knows. To me, I guess, it'll just be me.