9:20am
Burgos
Didn't take much effort to sleep later than the usual pilgrim alarm time.

Out, carrying the Pilgrims Guide, intending to 'do' the Cathedral properly. Through the streets, which are getting a little easier to understand, to find my way around. To the Plaza Major, the Croissanterie is the only bar that's open. So, it's a small coffee, which I'm trying to make last as long as possible. It's going to be a hot one. The sun already has some bite to it, and it's reflecting off the metallic table tops set up outside the cafe. Over to the right is the Casa Consistorial, arched pillars with some red lines and dates, I'm wondering if they indicate flood levels. Buildings with balconies. Shops on the ground level, the Confiteria Alonso, the Imaginarium with children's toys, a perfumeria, souvenir shops with expensive plates and glasses.
Pilgrims are beginning to arrive, the next wave. I'm wondering where they've arrived from, to get here so early. There's four bikie pilgrims at another table, but they don't count as real pilgrims. 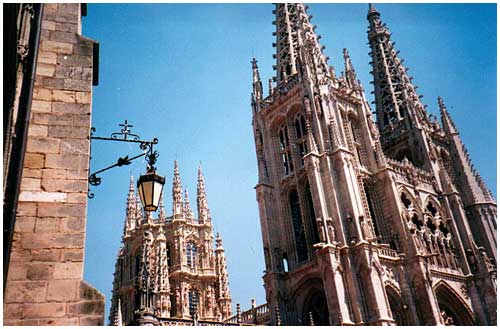 11:04am
In the Cathedral. Been here for quite some time. There's so much here it's a little overwhelming. Fifteen chapels, and great works of art in each. Gothic, Renaissance, Baroque, it all blurs, some are apparently a blend of styles, transitions from one to another. Looking into each, then paying the entrance into the Museum part. Again, so much here. Portraits of centuries of archbishops, a retablo of Santiago the Moorslayer, more crucifixions that Calvary itself probably witnessed, icons and Marys and Josephs and Adams and Eves and Trees of Jesse, and Magi, and infant Jesuses, some with crowns, some not, then the nailing up, then the 'rescue', then the resurrections, the entire bit. It's overwhelming after a while, becoming merely 'next', next, next.
Religious artefacts, processional crosses through centuries, communions cups.


Thee's the sarcophagi, the wealthy and powerful patrons of this city, all lying as though in a state of perfect bliss. Saints, angels, apostles, cherubs, it just goes on and on. Have to leave, the brain is full, for now.

Wanders, down to the river, and two people dressed in medieval costume emerge from the Principo Theatre, just strolling, but willingly being photographed with the tourists, I smiled at one in costume, and got 'Ola'ed' back. Then another look in the same bookshop from last night, browsing through some of the Camino books, photographs of places that I recognize, yeah, been there and done that. Then through some of the tourist shops, ended up buying a Saint Jacques cross pin for my hat (from the Art Espagnol, in Plaza del Santa Maria, so it's gotta be good), but refrained from the El Cid t-shirts, whom they've made look remarkably like some deranged Heavy Metal freak. Other places with El Cid swords and weaponry, more cards, thimbles, more cards, anything even vaguely Burgosian. Maybe other tourists buy loads of this junk, take it home, decorate their houses with it, and then maybe wonder what they were thinking at the time,

later
Wanders. Found a few bread shops, then the Delicatessen Ojeda, which is like Deli Heaven. Chocolates and sweets, tiny extravagant cakes; at another counter, cuts of meat, all seeming like variations on jambon; then the cheeses, hundreds of varieties; another counter with prepared food, delicious looking things in sensational looking sauces. It's hard to restrain myself, but I manage. Just cheese and yoghurt. Pilgrim food.

2:15pm
Back at the Cathedral. Second time. Using the Pilgrims Guide to understand what the Chapels are, who the Saints are. Often, the Saints are accompanied by their iconography, sometimes just the icons. Saint James is easy to find, he's the one with the scallop shall, and I'm pretty sure Saint John is the one with the key.
The tomb of El Cid in the centre. Just a slab, level with the floor. The choir stalls at one end, each seat carved differently. but the best, here, is to look up. The copula over the tomb is just brilliant, with Saints decorating the columns.

I think I came back here too soon, though, the brain just had a top-up.

3:48pm
Back in the Plaza Major. Wherever you walk in Burgos, it seems you either end up here, or at the Cathedral. Anyway, it's hot, and I'm having a coffee flavoured crushed ice thing, from the Heladeria, although there's not much crushed ice, more like coffee flavoured water. It's cold though.
Most things are closed. It's Spain, in the middle of the day, and it's a Sunday. There's tourists, probably rueing the fact they arrived in Burgos on a Sunday, and there's pilgrims looking for rooms. They're arriving late.

4:17pm
Wanders. No idea where, just kind of aimless strolling. Down streets that show promise, then streets off that, trying to keep to the shady side of whatever street I'm in, and end up at another cafe.

4:25pm
Yep, it's arrived, but it'll be frozen by the time I'm done, and probably mouldy.

5:15pm
Back at the Cathedral, third time today. Luckily, the Museum Ticket is good for repeat visits. Walk the rooms of the Museum again, off the cloister. Strange, this morning, it seems like I was looking, but this time I'm seeing. Stopping, and really seeing. The details in the silverwork, thinking of the craftspeople who put their hearts and souls and abilities into creating these works, in the metalwork, in the woodwork.
Hate to sound sacrilegious, but at times you wish that JC had had a more interesting life. It's all nativities, pietas and crucifixions. There's almost an entire life missing, the bit between birth and death, and the resurrection.
But, in the Chapter Hall, off a room off the cloisters, there's a very calm atmosphere. Parquetry flooring, and an even more detailed parquetry ceiling. Paintings of Mary, with JC as an infant. In the painting at one end, on the left panel of the triptych, an angel is giving the news to Mary, and the words he's using are flowing out of his mouth, like a speech bubble, the sentence in gold, flowing upwards.

6:45pm
And out, after what felt like a long time in the Chapel of the Condestables. Showed the ticket, allowed in. The retablos, matching what's in the guidebook with what I'm seeing. Then another look at the choir stalls, found the pissing angels this time, and others. Into El Cid's tomb. The huge photographic replica of the altar retablo, which is now somewhere else. I'm wondering how they managed to get the real thing out.

Sitting outside, on the steps leading up to the Cathedral entrance. Just over there is the 'petit train', the 'Cuidad De Burgos', and the tourists are piling in. And over there, there's a seat with a bronzed pilgrim, a very tired looking pilgrim. In fact, he looks pretty much like a dead pilgrim, with his head down, his staff in his hand, his scallop shell on a necklace, and tourists are almost fighting each other off to be photographed with it.

7:45pm
Fast Factory, no need to reserve a table. I just have to show my face in here, and my favoured table is made instantly available. Another 'grun-day' coke and boccadillo. Outside, in the Plaza the window overlooks, there's an apartment for sale, it's kind of tempting. On the other side of the Plaza is the Caja de Burgos, which, if I remember right, had something to do with Queen Isabella and Christopher Columbus.

The radio is on, as usual. The music seems to alternate between something Spanish, which all basically sounds like the same song, and other stuff. At the moment, there's something new which sounds vaguely like Canned Heat, but it's not.
Back to the Spanish songs, the one that all sounds the same has lyrics like "rim of the valley .." and on and on, or maybe it's "dream of the rally ..", or whatever.

later
Back to the river, along Avenue Generalissimo. Managed to find a bench not taken by the seemingly huge population of aged Burgosians that only come out in the evening. They take a stroll, sit by the boulevard. It would be a good old age. I envy them.

8:12pm
The priest I walked with yesterday said that The Way from Roncevalles to Burgos was the way of a something, I forget what, but the Way from Burgos to Leon was The Way of Death, where self-realization is absolute; and the third stage, from Leon to Santiago, amounted to The Way of Reconstitution, when the ego, decimated in the Way of Death, reassembles itself into a new form.
So, if this is true, then I begin dying tomorrow. This could be interesting.