Been on the road since about 6, the landscape could have been spectacular, but it was night-time. Finding the way by flashlight. Slowly becoming light. 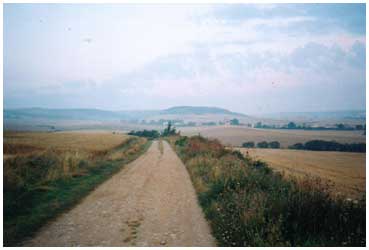 later
And how come every guy I meet, now, turns out to be a priest? Walked with an Austrian one this morning. Felt like company, so I greeted the first person I passed with "Ola, Bonjour, Good Morning, Buenas Dias, Guten Tag", I mean, he had to respond somehow, and did, in English. Talking about the Way, which isn't hard to do in a landscape this spectacular. And he's walked from Austria, Holy Bejaysus! But despite being a priest and having walked so far, he did manage to get us lost, for a while. Missed a sign somewhere, and had to trudge across a wheatfield. Not panicking, just aim for the road. Maybe walking with a priest means that God's on my side through association. Found the yellow arrows again soon enough.

The walk from Villafria into Burgos is described in the guidebook as the worst section of the Camino. A long stretch, 7kms but it seems longer, passing the enormous Gala Ceramics factory, then the even larger Bridgestone Tyre warehouse, not mention the airport. True, it wasn't pretty, but not entirely ugly either.

Walked into Burgos with Plasticbagman, of all people. It's his last day. His goal was Burgos, and he goes back to work on Monday.

later
Burgos
To the city centre, the Cathedral, thinking that maybe there's a cheap hotel nearby, as I intend to stay here for a couple of nights. The refugio is a few kilometers on the other side of town, and I couldn't be bothered walking to and from the city centre a few times a day. Happened across the Office de Tourisme, asked for cheap places to stay, given a map marked with places, "just turn left," I'm told. Turned left, couldn't find 'em. Wandered. Saw the Hostal Garcia. Rooms. Buzz the bell. Something in Spanish for "do you have a room por un individuale, por dos noches ?". Yes. 3rd floor. Shown a room. It's small, no view. It's like a room that a junkie would take a dying fix in. Whatever, it's clean. I take it. Have to pay cash, so maybe they're used to dead junkies, or live ones doing a runner.

Showered. Walk time. Yes, already walked 25kms today, but hell, this is a city to explore. Grab the pilgrim passport, and the Tourist Office tells me that the only places to have it stamped is either the refugio, or the Cathedral.

To the Cathedral. On the way, there's a string trio busking who are brilliant, a duo of jazz trombone and drums who are crap, and a clarinet duo, who're okay, I guess. Inside the Cathedral, the guy at information wants to know about my hat, "Australia," I say.
"Australia ?" he seems totally amazed, but he tells me I have to have the passport stamped in the Sacristy.
Find the Sacristy, eventually. This Cathedral is a major league tourist extravanza, a place of worship, a museum, a gallery of important artworks, the tomb of El Cid himself, so finding anything is difficult.

Then out, into the Plaza. There's a wedding happening, and the bridal party is Spanish dancing, the bride, the groom, the bridemaids and the best men are really into it. The castanets, the red waistbands, and they've obviously rehearsed this moment many times, and it's brilliant. There's applause from the assembled throng of tourists when they finish.

a little later
Found the Cyber Cafe, it's close to the Hostal Garcia. 30 minutes, 2.30 euros. Not too bad.

At the Fast Factory
Where they specialize in boccadillos. I've ordered one called a Piolin, and a large Coke. There's music, one song with the lyrics "what if God was one of us, just a slob like one of us, just a stranger on the bus, trying to make His way home". I remember it pretty well from 1995, but not the singer's name.

Wanders. So many people in the Plaza, walking, or dining. Down by the river it's almost a carnival atmosphere, with the stalls selling jewellery and tourist stuff. Find a bookshop, with some beautiful books on the Camino, but too heavy to carry.

Under the Burgos Gate, and there's a Busking Tour de Force. Four violins, 2 violas, cello, double-bass and an oboe. They were truly magnificent, and their audience was deservedly huge.

Then around to the front of the Cathedral. Recognized a pilgrim, chatted. Then joined by others I also know from The Road.

10:02am
I don't know any of their names, but I just celebrated the 1000kms in the company of other pilgrims in the Plaza del Santa Maria, in front of the Cathedral. Having a beer. Had an earlier one, with Anthony. The Way, for him, is the people he has met. Then they left to find a restaurant, and thanks for the offer, but I've already had tea, leaving me here. I don't care. I'm just watching the Cathedral.