5:20am
I think I'm awake. Plasticbagman is already up and playign with his plastic bags. may as well just get on with it then. Breakfast. Whatever the Spanish equivalent if 'le petit pain' with strawberry jam is, with yoghurt, and the obligatory orange.

a little later
Setting out. In the dark, it's still night-time, using the torch to find the markers. Following other people who are also using torches. Passed 'em. It's okay, I'm still following another pilgrim.

later still
Get lost. Haven't seen the markers for quite some time, and looking behind me, there's no-one. Eventually catch up with the only other pilgrim in sight, and she's lost too. We're both attempting to find Granon. Chloe is Spanish, and asks The Way from some guys that are out hunting with their dogs. Rifles, shotguns, dead birds hanging from their belts.
Yep, it's a "Bad Road", but apparently we have to continue, the turn right, rejoining The Way. Two sides of a triangle.

Eventually found Granon, Chloe asks the Way again. This time from an old couple leading their pigs through the town. Big, fat, black and white porkers.

Eventually found the arrows again. Hallelujah!
Didn't really talk with Chloe, as she has no English, but she understood my "Hallelujah!", and from then on I was her 'Compatriot of the Camino' or something. Walking through endless wheat fields, with the occasional thump of the shotguns.
The Way begins again, through some small towns. Recedilla del Camino, with it's massive baptismal font, Castildelgado, where Santo Domingo himself was born, and Villamayor del Rio, with not much at all except an extremely welcome fountain, so my head gets a soaking.

Talked with another pilgrim, a French woman. She's been walking the Camino for six years, 10 days a year, this time going as far as Burgos. Originally started as an entire family thing, husband and three sons. Over time, the two eldest boys stopped, now only her husband and youngest son. Lots of questions about Australia. Art and Politics. Apparantly Aboriginal art commands huge prices in Parisian exhibitions; is the Camino well known in Australia, well no. Are you free to speak your mind in Australia, well yes. Let's not forget that 20% of the French voted for LePen, and how when he speaks he is incredibly well received as he couches his real agenda in terms that sound reasonable. Does Australia have an equivalent, well yes.

But when that group, with the other French, including Anthony, began singing their French songs I just had to separate myself from them. Had enough. Just lengthened the pace, and they were out of earshot soon enough. The road from here is unmade, which is great, but parallels the highway. On and on.

11:41am
Belorado
And excuse me while I just hobble over to this table in the shade. Bejaysus, walk just over 20kms, fairly solid, then sit down, and it's hard to move, just hobbling around for a while.

Met up with some of Sharon's friends. The bald one. I asked if Sharon was still around, but no, she's given it away, and caught the train back to Madrid a few days ago. Oh well.

3:40pm
In a bar, naturally. La Eterna.
Wanders, through to this side of the dried-up stream. The eglise is closed for renovations, looks like it's been that way for ages.
Shakira's on the TV. Don't think we'll be seeing this clip in Oz, it's not in English, 'Te aviso, te enuncio', whatever that means.

The refugio is so bad it's funny, it's as though someone's converted a large garage and lined it with triple bunks (I'm in bed 19, a middle one). There's one shower for 35 people, and the stove is outside like a barbecue. Must seem like like I'm whinging, I'm trying not to, but right now I just feel like crawling into bed and staying there. So many people have given the walk away, but there always seems to be more on the road. Pilgrims who began at Saint Jean Pied du Port, others who started at Roncevalles, at Pamplona, at more recent places, the pilgrims whose shoes are still clean. Sometimes the roads are so long, there's lines of pilgrims leading the way and it looks something wonderful, each pilgrim with their own reasons for being where they are, but sometimes I wish they'd all just go away. Then arriving at the refugios, waiting 'til they open. Yesterday at 11, but usually 12 or 1.

The procedure is, when you arrive you plave your backpack in a queue, then, when they open, you get your pack queue up in the same order. First in the queue gets the first bed, then you present the pilgrim's passport to the hospitalero, and they stamp it. Sometimes the stamps are brilliant, but mostly not, then they date and initial it. Sometimes you have to fill in a form, which for some reason includes your passport number, where you began, where you spent the previous night, where you intend staying tomorrow, and your address. Others, like this one, just ask for your name and nationality. Sometimes the answer "Australia" raises a few eyebrows in surprise. You're then allocated your bed, or sometimes just told what room number. Find the bed, and lay your sleeping bag on it, so others know it's taken. Then, wash the stuff that needs washing, and shower. Wander the town, find the supermercado if there is one. Sometimes the smaller towns just have the one shop. They're basic, but usually have all you really need. Bread, noodles, spreads, drinks.

later
Still at the bar
The TV's on. We had Elvis on before, but now there's Marilyn Monroe. Clips from the movies, Gentlemen Prefer Blondes, Some Like It Hot.

Then, you plan tomorrow's walk. How far, the route, how many beds the refugio's have, if you have to leave early, how far you intend to walk. Basically just rest. In Spain, so far, you only walk 'til about 1 at the latest,as it gets really hot. It stops becoming a pilgrimage and starts becoming an endurance exercise.

Still, in the next day or two, I'll have done the 1000kms, it hapens in a town called Atapuerca. There's a refugio there. Might stay, don't really know yet.

5:00pm
And just as I was leavig the bar, discovered they had the Internet. Woohoo! Two new letters. Back to the refugio.

later
There's a pilgrim who's been attempting to entertain us with his Swiss Alpine horn. A bloody huge thing. You have to wonder sometimes.

9:07pm
Back in the town square, outside the church, and there's musicians and dancers, all colour and movement and castanets, the whole Spanish enchilada! Ole!!

Had another beer with Anthony, the first time since Conque. Ended up with the French family that I walked with earlier today. Like family, almost. Talking about places we've been, Navarrenx, Saint Chely, and the people who've come and gone, and the experiences that are still hard to believe, that Anthony and this family are from the same town in France, the miracles in Conque that seem to be different for everybody, and meeting friends in Cahors. 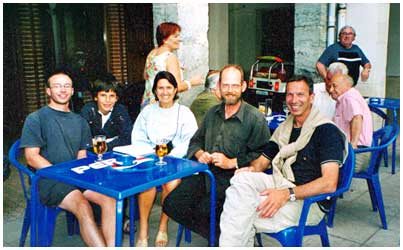 9:14pm
There's distant thunder again.
Today was good. Walking with people when I needed to, walking solo when I wanted. Easy. Tomorrow is fairly long. 25kms, and the guide book suggests at least three hours for the climb up into Saint Juan.