Los Arcos
1:25pm
Arrived. The bag's in the line. Waiting. Credential stamped, allocated a bed. D13, in the Dormitorio 2.

The day began at 5. Everybody just got up at 5, talking to Philip, not Philippe, another Philip, who I thought was another pilgrim but who turned out to be the hospitalero of the refugio. He did the Camino earlier this year, and just couldn't leave it. So, he became a volunteer worker. Later, he'll move to another refugio.

Walking by 6, finding the yellow arrows in the dark. Walked with Sharon, who's brilliant. Lightly raining, enough to muddy the paths, and enough for all the pilgrims to bring out the raincovers. Sharon mentions the cynicism of some of the other pilgrims, some about the walkers with boots, some about the many-coloured backpacks, whatever. Tried to be positive all morning, as though Saint Jacques himself was personally looking after us. Yes, it's raining, he's testing us then. Once we've passed the test, it'll be sunny, and all the clothes we'll be washing will be dry by this evening.
And, lo and behold, after we'd let the stream of water clean the mud from our boots, the sun did emerge, and it's stayed sunny ever since. Haven't washed the stuff yet.

Slight bummer, as the recently built tract housing on the outskirts of Estella meant that Irache was a lengthy detour. Thought about taking it, but finding the GR again, in the dark, would have been difficult. Turned out, though, the wine part of the fountain wasn't working anyway.

A small town along the way the way this morning, Maneru. One bar. One private refugio, and there's a bickering American family. Three boyos just annoying the hell out of each other. Then the Germans arrive, en masse, took over a table, brought out the food, mountains of it, then sang grace together. David and Mariana arrive. Then, in the rain, a barefoot pilgrim. Unbelievable. I'm wondering if he intends to do the entire Way barefoot, and whether he's a penitent or just insane. Even Saint James wore sandals.

To Cirauqui, which is just beautiful. 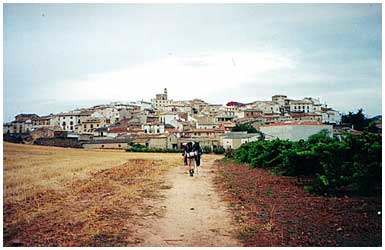 Further, the roads leading through recently harvested wheat fields, on and on, miles and miles of it. Perfect. Surrounded by these wonderful mountains, the highest mountains still wrapped in clouds, the heaviest, darkest clouds being pushed over by the wind. A small castle on one hilltop, a white house on the other, on and on, just getting better and better. 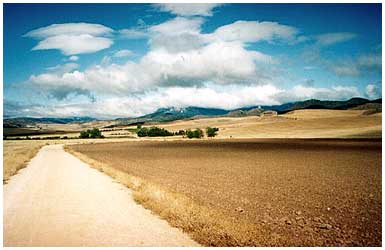 Turning a corner in the road and Los Arcos just appears. See a 'refugio' sign, but told by an old Spanish lady that the real refugio was over the 'puente', and it was.

David's turned up. A chat. He lives in Amsterdam, and Sharon intends to stop walking at Burgos, which is apparently a really beautiful city. I'll still have another 480kms or so after that.

Over there, there's a clothesline full of pilgrim socks, t-shirts and undies, and mine are about to join them.

4:50pm
The Abascal Bar
Cafe solo. There's Spanish music on the sound system, it's quite frenetic, with lots of trumpets. And again, on the TV, is the European Championships. The 800 meters; now the hurdles, and the small guy with the cap who was in the lead has broken down. A Spaniard has won, but there's a curious lack of excitement about it, in this bar at least.

Over the road is a service station. It, too, has a bar attached. A pilgrim, who I recognize as the friend of Textwoman, has been sitting outside it for quite some time, like she's waiting for a bus. Maybe it's the fourth day thing, for the Saint Jean Pied de Port people, with people just giving up. I don't think Guy will give up, but when I met him earlier he was limping really badly. Maybe it was all that singing that did him in, as there's only so many times you can be singing 'Brave Madeleine' with the others before you start wishing a damage on yourself just to escape it.

The cycling's on now, and this has the undivided attention of at least two patrons, old guys. Maybe they're remembering glory days.

Finished the coffee, but the bike race is still on. Sharon's at the next table, chatting with an even balder pilgrim. Apparently there's a communal tea at the refugio tonight, timed for about 8:30, after the special blessing of the pilgrims in the Cathedral. Haven't been blessed since LePuy, so maybe it's time for a top-up.

There's four kilometers left in the bike race, and the patrons have turned the sound up, don't know why, as one of the ex-glory days guys looks bored with it anyway, and he's glancing now and then at the two women, about 70 each, but who're dressed in their best. Their handbags on the table.

7:58pm
Cathedral.
The retablo is lit.

There's just been a funeral in here. When we were in here earlier, didn't feel comfortable about being a tourist while it was happening, so went back to the refugio. With David holding forth about the teachings of Gurdjieff, and the Seven Types of Man. The Physical, the Emotional, the Intellectual, the fourth who can combine all three, and then some kind of crystallization and melting to achieve other levels. Then lost interest when it became earnestly esoteric.

The Spaniards in here are so well dressed, and I feel like a slob in comparison.

8:02pm
And the bells above a going berserk. A heavy dong, followed by three descending tones.

The service has started. A woman reading something, stopping, with the congregation then repeating something. I don't know if it's the same sentence, or a different one each time.

8:15pm
The woman is still reading, then the responses, and the bells are starting up again.

There's two retablo's, one either side of the Cathedral. On the left, there's JC in the middle, and the two people on either side of him are carrying sticks. One is showing his right leg, a wound, maybe a pilgrim who's been attacked by a dog or something. The other one, on JC's left, is also carrying a big pointy thing. An anti-dog device, obviously. These two know the score.

The Cathedral is nearly cômplet, with every pew taken. The well-dressed and the slobs together,

The choir sings, from somewhere upstairs at the back. The Lord's Prayer in Spanish. Sharon tells me it's a service for the elderly. Appropriately, there's on old guy, with a cane, nudging me to make room in the pew. And I think the woman doing the reading is one of the women from the bar earlier. The choir sings again, short. Now a priest in white, and Hallelujah from the choir.

It's a service for the retired, it's their day. Their life's work is being celebrated. Good idea to do it while they're still living. The communion, and the symbols of old age are being blessed, a cane, a beret, a pack of cards.